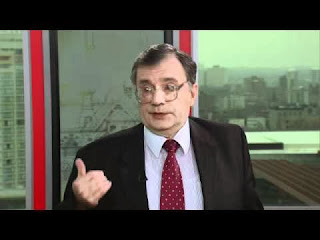 Russia's ambassador to Canada, Georgiy Mamedov, says Western nations “overreacted” in their concerns gay athletes would face discrimination at the 2014 Winter Olympics, which open in Sochi in February.

“You know what the main story is in Moscow today at this particular time? Elton John's concert,” he said Friday, in response to a question about the controversy during a news conference at the Russian embassy in Ottawa.

“It will be as tough to get tickets there as it is to get to the hockey finals during the Winter Olympics. So you shouldn't be concerned.”

(Later that night, the openly gay pop singer spoke out about Russia’s new laws during his sold-out Moscow show, calling them “inhumane.”)

Western governments, activists and some private companies have been sharply critical of anti-gay laws brought in by Russia this year, which sparked calls for an Olympic boycott.

The laws ban the distribution of homosexual “propaganda” to minors.

In August, Foreign Affairs Minister John Baird offered a sharp rebuke to Russia over the new legislation, calling it “mean-spirited and hateful” in interviews with the media.

But he said Canadian athletes would still attend the Games.

Mamedov said the laws are widely misunderstood and that the Winter Games in Russia will fully comply with the Olympic charter. Among other provisions, the charter protects all athletes from discrimination.

“We gave all assurances on all the levels that people of all stripes will enjoy themselves at the Olympics,” he said.

“I would personally hate to see if someone would want to make a political show out of the Olympics and undercut the abilities of all the young people who spent four years of their life just to be prepared. I want to see fair competition. Nobody will be discriminated (against).”

NDP MPs raised the issue at a House committee in November and sought assurances that no Canadian athletes, fan or journalist would be targeted under the rules.

Canadian officials said Russian authorities have promised no athletes will be targeted.

What a dumbass, the world isn't so concerned about how the athletes will be treated at Sochi as they are in how your repressive governmental regime has relegated it's gay citizens to a hostile environment and continue to ignore or turn their heads away from any violence committed against. them
This same government, that insist gays are not being persecuted, turns a blind eye to the atrocities committed against them and continue to deny them (just like this) to the rest of the world.
As far as Elton's concert is concerned, I'm betting a weeks wages, not one word of his *statement* made it beyond the walls of that concert hall to the general public in Russia.