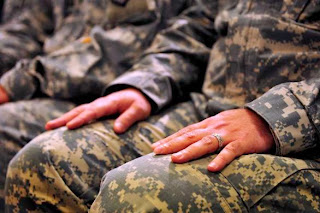 The Georgia National Guard has become the latest state to agree to process spousal benefit applications for troops in same-sex marriages, according to two sources familiar with the decision.

Maj. Jon Craig, a National Guard Bureau spokesperson, said Georgia had agreed to process applications to grant same-sex spouses military IDs last week in a decision along the lines of Texas and Louisiana.

“With Georgia, what it came down to was the authorization to put some state employees on temporary federal status,” Craig said.

Georgia had been one of two remaining states that had refused to enroll the spouses of gay troops into the benefit system in the aftermath of an edict for Defense Secretary Chuck Hagel saying military spousal benefits should be available to troops in same-sex marriages nationwide. These states had cited state constitutional amendments barring same-sex marriage as the reasons why they couldn’t comply.

In the past weeks, Texas and Louisiana, which had previously refused to process same-sex benefits, said they had come to agreement to comply with the edict by processing applications through federal funds, personnel and systems.

Lt. Col. Thomas Lesnieski, a Georgia National Guard spokesperson, acknowledged changes were made, but declined to comment further until the guard issued an official statement later on Monday.

Chris Rowzee, a spokesperson for the American Military Partners Association, commended Georgia’s decision, but questioned what exactly had changed because her understanding is federal resources were already being used to process benefits applications at National Guard facilities.

“Certainly, we are pleased that they have changed course and are now providing the federal benefits to which these military members are entitled,” Rowzee said. “We still have questions regarding what has actually changed since all of the personnel processing those benefits were federal employees to begin with.”

A defense official, speaking on condition of anonymity, also said Georgia had agreed to comply and the Pentagon views the decision as “welcome news.”

The official added the decision leaves Mississippi as the only state that isn’t conforming to federal policy, saying National Guard Chief Gen. Frank Grass continues work on the issue.

“The Secretary has directed General Grass to resolve this issue with the TAGs,” the official said. “Gen. Grass, and the National Guard Bureau are continuing the dialogue with Mississippi — the only remaining state to comply with DOD Policy.”

A Mississippi National Guard spokesperson deferred comment on whether the state would come into compliance Mississippi Gov. Phil Bryant’s office, which didn’t respond to multiple requests to comment.
Posted by Ulf Raynor at 5:21 PM