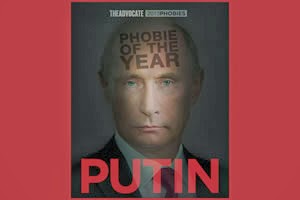 Gay glossy The Advocate on Friday named Russian President Vladimir Putin its Phobie of the Year.


“To hold the president of Russia responsible for every anti-gay incident within his country's borders might be unfair,” the magazine wrote in announcing its winner. “But it's far less offensive than what's happening to LGBT Russians.”