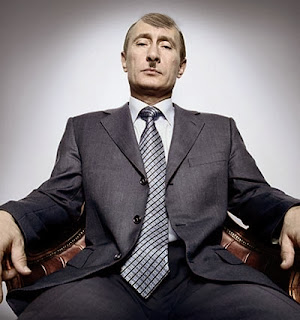 Russian President Vladimir Putin has used his annual state of the nation address to defend a controversial anti-gay law.


In his 70-minute televised speech delivered from an ornate Kremlin hall, Putin defended conservative values without naming the law which prohibits the promotion of “gay propaganda” to minors.


“This destruction of traditional values from above not only entails negative consequences for society, but is also inherently anti-democratic, because it is based on an abstract notion and runs counter to the will of the majority of people,” Putin said.


Approval of the law provoked worldwide condemnation and calls for boycotts of Russian made imports and international events taking place in Russia, including the upcoming Winter Olympics in Sochi.


The AP reported that Putin's remarks were met with enthusiastic applause from an audience made up of lawmakers, judges and religious leaders.
Putin's speech sounds very much like a typical one made by Adolf Hitler during his rise to power and as for enthusiastic applause from his audience of lawmakers, judges and religious leaders...these were the same type people who supported Hitler, just goes to show you, those who will not learn from history are condemned too repeat it.  Very much speaks to the character of this man... or lack thereof.