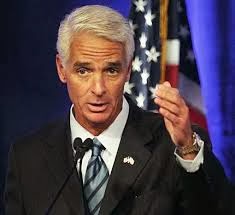 
Voters approved the amendment in 2008, two years after Crist had signed a petition to put it on the ballot.


“I'm sorry I did that. It was a mistake. I was wrong. Please me,” Crist told gay weekly Watermark Online.


After an 2010 bid for the Senate as an independent, Crist officially became a Democrat in late 2012.
Crist argued that he opposed marriage equality and gay adoption as a Republican because he wanted to toe the GOP line.


“The examples you cite were examples of me trying to be a good Republican,” Crist said. “I couldn't do it anymore, and I'm sorry I did. I made a mistake. I'm not perfect... please don't hold me to that standard. And I'm sincerely sorry. I understand when it's necessary to say I was wrong. That's the journey I'm on... and I'm still on it.”


“As a Republican, on social issues I always felt I was a round peg in a square hole,” Crist added. “I just didn't fit. But I tried, until I couldn't do it any more... until I had to say, 'Enough is enough.'”


In November, Crist announced his bid to return to the Governor's Mansion – this time as a Democrat.
One question Charlie...now that your a Democrat, how do we know for sure your not just trying to toe the Dem line now?
Inherently, I have a problem with someone who wants to be a leader, who so freely admits,following was more important, even knowing it was wrong.
Next!

Unfortunately the incumbent is just as bad. Right now the battle for governor here in Florida is pretty much like asking the voters if they'd rather be shot or stabbed -- you have to make a choice but you're not happy with either of the options.