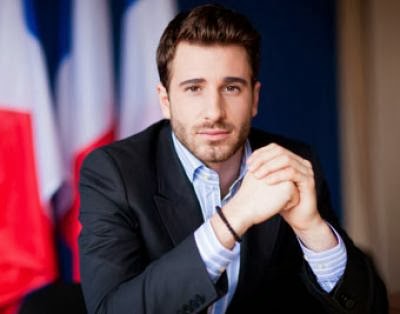 A right-wing youth leader is calling for a gay propaganda ban in France.
Julien Rochedy, 25, of the National Front demanded a similar law to Russia be introduced.
‘What I know is that the law bans LGBT propaganda in schools. That is their priority, and yes I would like that,’ he said in a radio interview.
‘Why not have it? Why not have it in the streets as well?’ When told Russia has seen several arrests, suicides and murders since the law was introduced, Rochedy said that was ‘complete nonsense’. Rochedy, known as the ‘beau bigot’, is the rising star of the extreme right party. This ‘petit Putin’ is often trotted out to argue on right-wing National Front social policies, known for his ability to seduce young voters. The party is recovering after suffering a major loss last year after same-sex marriage and adoption was passed into law. Speaking in 2011, National Front’s leader Marine Le Pen said: ‘I am totally opposed to gay marriage and I think that only a minority are for it anyway. Adding: ‘Gay pride events with it's parades are, as a general rule, provocations against other people, noticeably Catholics.’
I wonder if it was just difficult to understand what he was saying with a big fat dick in his mouth?
This boi reeks of closet case.
I know, maybe we can introduce him to Aaron Schock and they can fight the dreaded scourge of homosexuality together, that is, when their not sucking and fucking each other and fighting over closet space.

He so has the gay face! Glad someone else sees it too!