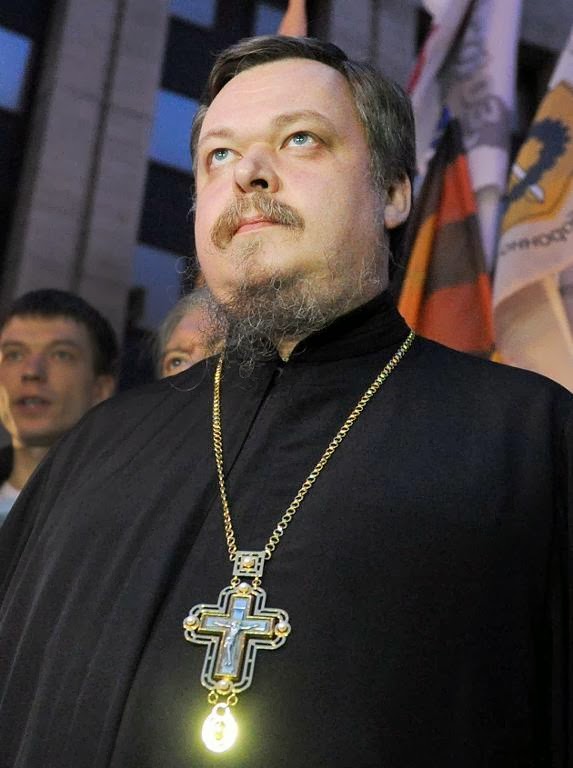 Russia's powerful Orthodox Church proposed Friday a referendum on banning gay relations in the face of Western pressure over human rights ahead of next month's Winter Olympics in Sochi.
The Church's abrupt intervention came amid a growing debate over whether the Kremlin should mount a firmer defense of traditional values that many in the overwhelmingly conservative country view as coming under attack from Europe and the United States.
Church spokesman Vsevolod Chaplin pointed to polls showing more than half of Russians viewing homosexuality as either an illness or a crime as a sign that the country was ready to revert to a Soviet-era homosexual ban.
"There is no question that society should discuss this issue since we live in a democracy," Chaplin told the online edition of the pro-government Izvestia daily.
"For this reason, it is precisely the majority of our people and not some outside powers that should decide what should be a criminal offence and what should not," he said.
High-profile global celebrities and sports stars have already urged athletes attending the February 7-23 Olympic Games on the Black Sea coast to show their support for Russia's lesbian-gay-bisexual-transgender (LGBT) community by flashing protest signs.
Their call came after President Vladimir Putin last year signed fast-tracked legislation making it illegal to "promote" same-sex relationships in front of minors.
Chaplin -- an outspoken but also influential Church figure who airs weekly shows on state TV -- claimed that most countries viewed homosexuality as a crime.
"I am convinced that such sexual contacts should be completely excluded from the life of our society," said the Church spokesman.
"If we manage to do this through moral pressure, all the better. But if we need to revert to assistance from the law, then let us ask the people if they are ready for this."
The Soviet Union criminalized homosexuality in 1934 at the height of repressions by Joseph Stalin that saw millions die in labor camps.
Post-Soviet Russia quietly repealed the law in 1993 while still allowing officials in big cities such as Moscow to ban gay pride parades and other displays of homosexual rights.


Most Russians back gay ban


A study conducted by the independent Levada centre a month after the "homosexual propoganda" ban's adoption showed only one in five Russians believe that people were actually born gay.
More than a third said homosexuality should be treated medically and 13 percent backed the idea of making it a crime -- results suggesting that Chaplin's proposal would pass easily if ever put to a vote.
The Kremlin did not immediately respond to the Chaplin's suggestion. But a prominent member of Putin's ruling party who oversees parliament's legislative committee said international treaties adopted by Russia made passage of such a ban unlikely.
"We have moved on from those times," Pavel Krasheninnikov told the Interfax news agency.
"It is absolutely clear that such a law will not be adopted -- in part because of our international obligations," he said in apparent reference to the European Convention on Human Rights.
Some members of Russia's LGBT still treated Chaplin's comments as part of a worrying trend that has seen opposition views suppressed under Putin's 14-year rule.
"If you stage a referendum in Russia, 90 percent would back both the death penalty and the idea of shooting all homosexuals," gay pride parade organizer Eduard Murzin said in a telephone interview.
"By discriminating against minorities, the authorities want to deflect attention away from other problems," Murzin said.
Prominent Russian LGBT leader Nikolai Alexeyev said the Church spokesman appeared to be lobbying the Kremlin to back his idea.
"It may be that the authorities do not want to do this ... because this would only escalate tensions between Russia and the West," said Alexeyev.
"But these people are trying to give the idea a push," Alexeyev told AFP.

Doesn't Vsevolod Chaplin just look like he's full of Christian love, forgiveness and charity?
He has the demeanor and air of a benevolent, selfless, pious man, and like Joan of Arc, a regular saint...and also like her, can't we tie him to a stake and set him on fire and send him on his way to his much desired martyrdom?
Juz say'in it's what he would want us to do. ; )

What a piece of shit.