Arrested, And It Only Took Two Weeks! 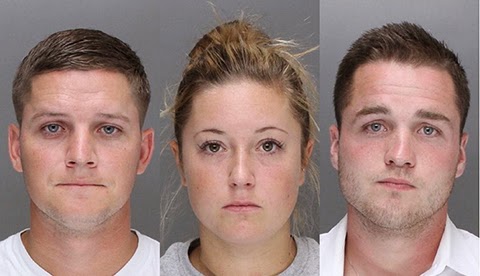 
From left, they are: 26-year-old Kevin Harrigan of Warrington; 24-year-old Kathryn Knott of Southampton; and 24-year-old Philip Williams of Warminster.
All three defendants are charged with aggravated assault, criminal conspiracy, simple assault, and recklessly endangering another person.

But they swear, the mean ol' gay guys started it, one lawyer even stating that one of the *purported* victims punched one of the girls in the face first.
I'm sure they are the real victims here.  Just look at all the disfiguring scars and bruises inflicted on them during this self defense *street brawl.*

There are folks in prison who are just going to LOVE these three when they get there!

I'm sure their lips will become puffier and sexier after a short time, not to mention other areas of their bods!

It truly amazes me how they are totally using they started it with us first and not a single one of them reported to the police that they were attacked. It's sick that they will probably get the charges dropped.