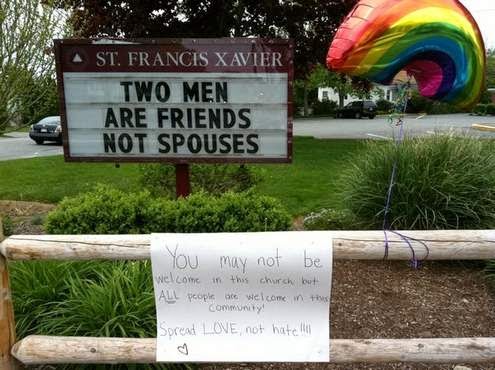 A married gay couple has been denied communion and told they can no longer participate in church ministry unless they separate and divorce.
According to The Billings Gazette, Paul Huff and Tom Wojtowick, together more than 30 years and lifelong Catholics, married in Seattle last year.


Rev. Samuel Spiering was in his post as administrator of St. Leo the Great Catholic Church in Lewistown, Montana four days before he met with Huff and Wojtowick to ask them if they had married. The following day, he told them they could no longer receive Communion and dismissed them from their volunteer posts in the church.
Huff, 73, and Wojtowick, 66, started attending St. Leo's in 2003.
Two weeks later, the men agreed to write a restoration statement supporting the church's definition of marriage as between a man and a woman.
The men said that what mattered to them were the civic protections of marriage, not challenging the church.
Wojtowick said that when he met with Spiering to write the statement, they were also asked to agree to a divorce, which the men did not agree to.
The incident has led some people to leave the parish. Bishop Michael Warfel of the Diocese of Great Falls-Billings is expected to discuss the situation with parishioners on Saturday night.
“This is not animus against someone who happens to be a homosexual; this issue is the same-sex marriage,” Warfel told the paper. “A lot of people put those two together, and obviously there's a connection, but it's not the same thing.”

I don't know what's more pathetic, this Bishop who thinks saying he doesn't hate gay people, but believes they can't be gay and be a Catholic is somehow not homophobic?
Or the fact the couple was ready to throw their gay brothers and sisters under the bus so long as they could stay together and go to this *church* if they agreed (in writing) that homo's have no right to marry (except for them of course)
Posted by Ulf Raynor at 6:37 PM

How anyone can be so blinded by religion to want to attend a church that hates them is something I will never understand.