On A More Humorous Note... 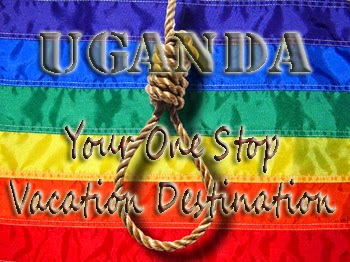 Uganda Tourism and business leaders have promised their country is safe for LGBT people to travel to, in a meeting with the International Gay & Lesbian Travel Association (IGLTA).
Accusing the Western media of portraying their nation in a particularly poor light since the introduction of the ‘anti homosexuality’ law, which was struck down earlier this year, IGLTA’s President John Tanzella said the delegates had requested the meeting as an attempt to restore their reputation, both among gay and straight travelers.
The meeting was held at the invitation of the Africa Travel Association at a convention in the US. Tanzella reported: ‘The delegation said that gay people are welcome. They were very concerned about the perception of Uganda in Western Europe and North America, and claimed that the backlash caught them by surprise. No-one thought it would pass. The delegates all pointed out that they have friends and family who are gay.’