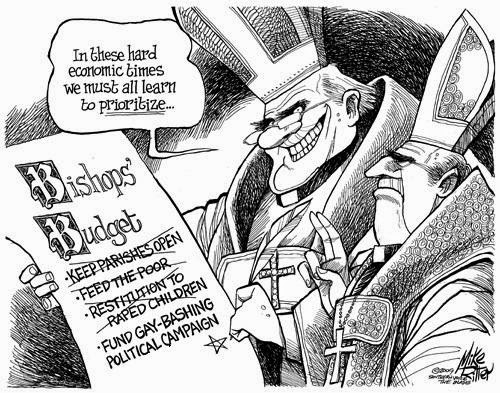 Cardinal Francis George, the Archbishop of Chicago, argues in a recent column that American Catholics risk their citizenship if they don't conform to the pro-gay “state religion.”
This religion, he said in a column titled A Tale of Two Churches, imposes “its own form of morality on everyone.”


“[T]hose who do not conform to the official religion, we are warned, place their citizenship in danger,” he wrote.
George accused “those who shape public opinion in politics, in education, in communications, in entertainment” of imposing this religion.
“We are told that, even in marriage itself, there is no difference between men and women, although nature and our very bodies clearly evidence that men and women are not interchangeable at will in forming a family.”
“Swimming against the tide means limiting one’s access to positions of prestige and power in society. It means that those who choose to live by the Catholic faith will not be welcomed as political candidates to national office, will not sit on editorial boards of major newspapers, will not be at home on most university faculties, will not have successful careers as actors and entertainers. Nor will their children, who will also be suspect. Since all public institutions, no matter who owns or operates them, will be agents of the government and conform their activities to the demands of the official religion, the practice of medicine and law will become more difficult for faithful Catholics. It already means in some States that those who run businesses must conform their activities to the official religion or be fined, as Christians and Jews are fined for their religion in countries governed by Sharia law,” he concluded.

And why shouldn't they pay, just like any other political movement?
Basically, what he's really saying, he fears that homosexuals will now do to Christians, what they have been doing to them for two thousand years.
Not to worry tho Bishop, unlike so many Christians, we really do love our fellow man.
Posted by Ulf Raynor at 5:40 PM