Gay Hate Down Under 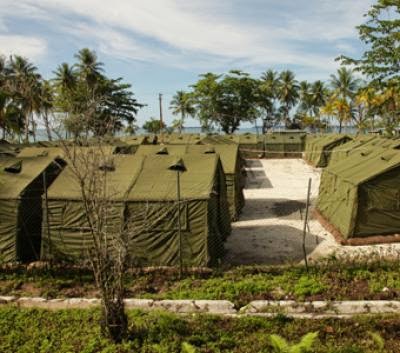 Gay aslyum seekers, who fled persecution in their home countries and sought asylum in Australia, will reportedly be resettled in Papua New Guinea where it is illegal to be gay.
Currently held by immigration officials on Manus Island in Papua New Guinea, the asylum seekers could be expected to live their permanently.
Homosexuality in the island nation is punishable by up to 14 years in prison.
'I thought Australia and its people would be my protector, but they taught me otherwise,' a letter shown to The Guardian reads.
'I am so sorry I was born gay! I never meant to hurt you mom! I wish our boat had sank in the ocean and disallowed me to live the most painful year of my life.'
Another says: 'I have to hide my sexuality because in this country, like Iran, there are a lot of people – fanatics – whom if they find out anyone is gay they would harass them and maybe even try to kill them. 'I have to hide my personality once again. I have to live as someone else.'
The authenticity of the letters has not been confirmed. An Amnesty International report from December said the facility detainees had been told if anyone was found to be engaging in homosexual acts, they will be immediately reported to the police.
Ben Pynt, director of Humanitarian Research Partners, estimates there are around 36 gay men detained at Manus and several others who are too afraid to reveal their sexual orientation.
Australian Immigration Minister Scott Morrison, who did not respond to the Guardian’s request for comment on the purported letters, said he was unaware of any claims of homosexuality among Manus inmates. He also denied it was the Australian government’s policy to report homosexual activity among asylum seekers to the PNG government.
Posted by Ulf Raynor at 5:14 PM