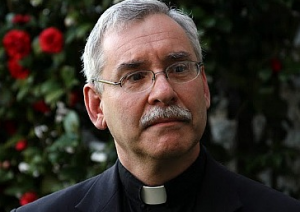 Bishop Anthony Taylor of the Roman Catholic Diocese of Little Rock argues in a brief in support of Arkansas' gay marriage ban that allowing such unions would lead to incestuous marriages.
On May 9, Pulaski County Circuit Judge Chris Piazza struck down the state's 10-year-old voter-approved constitutional amendment and a 1997 law prohibiting gay couples from marriage. Roughly 500 gay and lesbian couples, most of them in Pulaski County, exchanged vows during the 6 days that transpired before the state's highest court put the ruling on hold pending an appeal by the state.


In a friend of the court brief submitted Thursday, Taylor argues that allowing gay couples to marry would undermine an institution that is the bedrock of society and lead to unions of “couples such as mother and daughter, sister and sister, or brother and brother.”
The Human Rights Campaign (HRC), the nation's largest LGBT rights advocate, denounced the church's brief.
“In a state with a history of oppression, we would hope that religious leaders above all would understand that defending freedoms under the Constitution protects people in the margins – those who have rarely been protected by popular vote,” Lisbeth Melendez Rivera, director of Latino/a and Catholic Initiatives at the HRC Foundation, said in a statement.
“Bishop Taylor’s language is not only un-Christian, but so utterly offensive that it only serves to undermine his integrity and the already-untenable notions contained in his anti-marriage equality brief,” Rivera added.
My response to the Bishop would be this:
Yes gay marriage would undermine the institution and lead to same sex incestial marriages in the exact same way heterosexual marriages have led to opposite sex incestial marriages.
Just another homophobe inciting his weak minded base with lies and falsehoods.
In other words...same ol' thing they've done for two thousand years.
Posted by Ulf Raynor at 4:44 PM