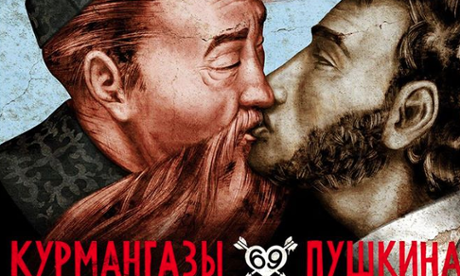 Lawmakers are now working on a new version of the Marriage and Family Code that already bans people known to be gay from adopting children. This is where the anti-gay changes are expected to appear soon.
The legal ban is highly called for, according to Bolashak's leader Dauren Babamuratov, 30, because the Kazakh society has been experiencing a lot of pressure from its gay members over the past several years.
Babamuratov continued by saying that "unconfirmed reports suggest there are about 14 gay clubs and bars in Almaty" with effectively "made Almaty the gay capital of Central Asia", and expressing his outrage at the fact that "open discussion of the issues related to LGBT community is treated by the society as a natural process".
To support the claims that gay propaganda existed in Kazakhstan the chief speaker reminded about the scandal over the now infamous ads poster depicting a local version of the world famous gay smooch, this one between two historical figures – one Kazakh, the other – Russian. The poster caused quite a stir among Kazakhstanis and several political figures even slammed it publicly. A law suit was filed against the poster creators.

"We have stooped so low that LGBTs no longer hide their orientation. One can see a lot of people in the city's malls and other public places — these are young people in coloured pants. This means they no longer hide their (sexual) orientation. I think it is very easy to identify a gay person by his or her DNA. A blood test can show the presence of degeneratism in a person," said Dauren Babamuratov, the leader of the Kazakh national.
Head of the Youth Policies Department of the Akmaty Akimat (Municipal Authorities) Sanzhar Bokayev, who was the only representative of the city administration at the meeting, declared that Kazakhstan's gay community was "supported and funded from abroad". "This is a big problem that concerns our society," he said.
Secretary of the People's Communist Party Yelnur Beisenbayev supported the speakers and went as far as saying that gay people were sick, they where criminals and deserved a much harsher treatment. "Besides the legal ban of the propaganda we should also adopt an anti-sodomy law like the one we had during the Soviet time. We need these laws, to makes these (gay) people ashamed of themselves in our society," he said. The anti-sodomy law he was talking about was cancelled in Kazakhstan only in 1998.
Nagashybay Yesmyrza, a journalist known for calling Adolf Hitler a war hero, tagged representatives of the LGBT as degenerates and used his favorite rhetoric: "To preserve the Aryan race it was important that blood was not mixed. Hitler was against all those gay people," he said. But when asked by the journalists how a same-sex union could possibly "mix blood" and produce a child, he had no adequate answer.
Earlier, Aldan Smayil, a Member of the Parliament's Lower Chamber, the Majilis, said that Kazakhstan needed a legislation that would enable it to close down gay clubs and bring their owners to justice. He also declared that the idea of gay pride parades in Kazakhstan was unacceptable.
The MP said that representatives of sexual minorities needed the help of psychologists, and promised to make sure that law enforcement authorities would tighten their control over the people organizing events in support of the LGBT movement.

It's a shame they haven't found a cure for willful stupidity, something greatly needed, but not only in Kazakhstan.

If they found a cure for stupid they would repress the information because smart people don' fill the coffers.