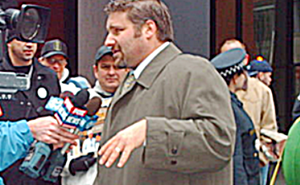 Christian conservative Matt Barber said in a column over the weekend that he's honored to be a “hater” called by God to tell gays HIV is punishment for the sin of homosexuality.
Barber, an outspoken opponent of gay rights, dismissed criticism of his anti-gay rhetoric by saying that he was doing God's work on Earth.


“The wages of sin is death,” Barber wrote. “Yet in today's upside-down world it is we who are disingenuously accused of 'hate' – those of us who remain compassionate and bold enough to warn our fellow human beings of the spiritual, emotional and, yes, even the physical death that comes as a natural consequence of unnatural behaviors.”
“Homosexual conduct is always sin. It always has been. It always will be. It is never good, healthy, normal or natural.”
“I'm honored to say that I'm one of those 'haters' called by God to sound the alarm,” he added.

Yup Matt, it's safe too say, everyone's gonna die someday, including your very own self righteous self.
Can't happen to soon if you ask me.  Keep shoving that Chick fil a crap down your facial anus.

In that picture he shows a very LIMP wrist. Possibly he is gay himself and feels good by saying shit about LGBT folks since he can't/won't say it about himself.