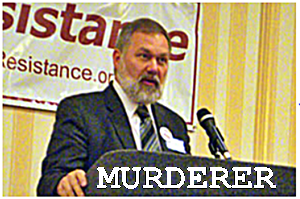 Anti-gay activist Scott Lively has accused the Human Rights Campaign (HRC) of “deliberately trying to incite murder” against him.
HRC has released a report titled Exposed: The Export of Hate, which seeks to shine a light on the “network of American extremists who work tirelessly to undercut LGBT people around the world at every turn.”


Lively, president of the Massachusetts-based Abiding Truths Ministries, is among those profiled in Export of Hate.
“There is a war going on in the world,” Lively is quoted as saying. “There is a war that is waging across the entire face of the globe. It's been waging in the United States for decades. And it's been waging in Europe for decades. It's a war between Christians and homosexuals.”
In response to the report's publication, Lively said, “I believe they are now deliberately trying to incite murder against me and every other person on their enemies list.”
“Because I am a Bible-believing Christian I am not afraid of death. But neither am I volunteering for martyrdom. As of today I am for the first time going to start taking precautions against the possibility of being assassinated by agents of the LGBT movement. For one thing, I will no longer publicize my travel schedule in advance.”
Lively also demanded a retraction and a public apology from HRC.
“STOP INCITING HATE BEFORE YOU GET PEOPLE KILLED!!!!!,” Lively concluded.

Scott, gay people don't hate your for having religious beliefs, gay people hate you because your a genocidal lunatic bent on the outright annihilation of gay people.
As for your last statement, practice what you preach asshole!
Posted by Ulf Raynor at 7:02 PM

Scott Lively is one of the most hateful bigots and boy doesn't he like to project.

What a cry baby!