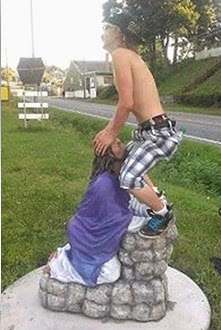 Here's the gist of the story, some teenage boy simulated oral sex with a Jesus statue (fully clothed mind you) and post the pic to Facebook.
Someone saw the pic, got offended and the kid was arrested and charged for: “Desecration of a Venerated Object.”
Here's the portion of the Pennsylvania law he was charged with: “Defacing, damaging, polluting or otherwise, physically mistreating in a way that the actor knows will outrage the sensibilities of persons likely to observe or discover the action.”

The law itself is for the protection of waterways and wells, not religious objects.
One problem, this kind of law has already been determined to be unconstitutional in Federal court:
Texas v. Johnson, 491 U.S. 397, 406–410 (1989)
Which invalidates any state laws that prohibit “desecration of venerated object[s]”

True, the kid did something stupid and...well...childish.
But is putting him in jail for two years, for an unconstitutional law, a worthy punishment for poor taste?
Posted by Ulf Raynor at 5:56 PM

It is stupid and childish - but it's also kinda funny! The idiotic thing here is the ability to take a perfectly valid law and apply it in a totally irrelevant situation. Mad...

Just for the record, it made me laugh in that *I might of done that as kid* way.
As a side note, I really miss your fuckin' blog, it was a daily stop of mine.

I thought it was hysterical...btw, strayf is on Tumblr, now