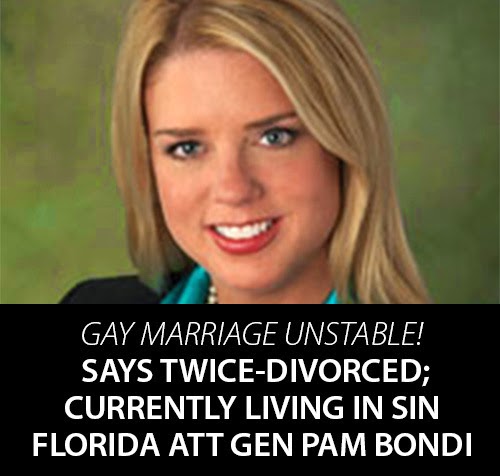 Florida is preparing to begin issuing marriage licenses next month to gay and lesbian couples after the Supreme Court refused to delay implementation of a federal judge's ruling striking down Florida's ban on gay marriage. But the state continues to argue that gay couples will only be allowed to marry in the one county named in the lawsuit.
The Supreme Court's decision not to intervene in Florida is noteworthy because it is the first case in which the high court has denied a stay in a case challenging a state marriage ban before a federal appeals court has weighed in. (Though an appeals court has declined to stay the ruling.)


In a statement issued late Friday, Attorney General Pam Bondi appeared to be digging in her heels on which counties may begin issuing marriage licenses to gay couples after January 5, when the current stay expires.
“Regardless of the ruling it has always been our goal to have uniformity throughout Florida until the final resolution of the numerous challenges to the voter-approved constitutional amendment on marriage,” Bondi said.
The Florida Association of Court Clerks and Comptrollers issued a statement on Tuesday backing Bondi's claim and warned clerks that the issuance of an improper marriage license is a misdemeanor offense.
Lawyers representing the plaintiffs have repeatedly said that the ruling applies statewide.
A county that wants to continue enforcing the ban would face a steep incline in federal court after the Supreme Court's decision.
Activists on Friday said that they were prepared to sue each of the state's remaining 66 counties, if necessary.
Attorney Carrington Mead told First Coast News: “I think that if what they want is for each clerk to be sued, then we should accommodate them.”
Nancy K. Brodzki, a family lawyer in Coral Springs, tweeted on Saturday: “I'm ready to file suit against any and all clerks of court who refuse to issue marriage licenses!”
How many clerks are willing to risk costly litigation to delay issuing marriage licenses to gay couples remains to be seen.
Florida's 3-day waiting period means that the first gay couples will tie the knot on January 10.

I know other sites have been reporting that state AG Pam Bondi has conceded after the Supreme Courts decision, but doesn't look like the bitch is giving up to me.
Posted by Ulf Raynor at 3:45 PM