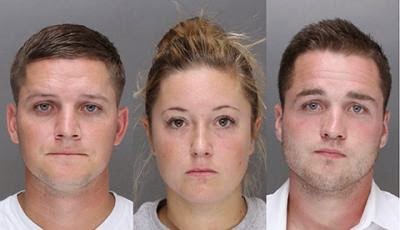 Two men and the daughter of a local sheriff were ordered to stand trial Tuesday (16 December) in connection with the September beating of a gay couple in Philadelphia.
Kevin Harrigan, 26, Philip Williams, 24, and Kathryn Knott, 24, are to be tried for aggravated assault, criminal conspiracy and other charges.
The trio cannot be charged with a hate crime, however, because sexual orientation is not covered in the state of Pennsylvania's current hate crime law. One of the victims of the highly-publicized attack testified before a Philadelphia judge about the 11 September attack. He said Harrigan used anti-gay slurs to ask the man if he and his partner were gay.

Hesse said that when the pair encountered the group at 16th and Chancellor, Harrigan asked, "Is that your fucking boyfriend?" "I said, 'Yeah, that is my fucking boyfriend," he testified. "'Do you have a problem with that?'" Then he testified that Harrigan said, "'So you're a dirty fucking faggot?' So I approached him and said, 'Maybe I am a dirty fucking faggot.' He pushed me, I pushed him."
Then Hesse says that he was surrounded by the group. "I was terrified," he testified. "It's scary to have people surround you, and your arms are being held."
They then got into a heated verbal exchange that turned physical. The man told the judge that he was hit in the face by Harrigan then Knott pointed at him and held her hand in his face. 'She was clawing at my face,' the man testified. He said he pushed Knott away then Williams approached, struck him in the face and also assaulted the boyfriend who fell to the ground.
The victims were taken to a hospital after they were attacked. Knott is the daughter of Chalfont police Chief Karl Knott. She has gained notoriety since her arrest because it was discovered that she had posted photos of patient X-rays on Twitter that she had access to through her job at a hospital. She has since been fired from the Lansdale Hospital where she worked as an emergency room technician. A month after the attack, the couple issued a statement about what happened to them.
'We feel sorry for our attackers - people who believed it was OK, cool, maybe even funny, to use two innocent individuals as their punching bags and not even have the decency to apologize,' they stated. They added: 'You butchered my boyfriend’s beautiful face. You violated our rights. You jeopardized our health and safety in a city that we love and during a time where so much progress around human rights has been made. 'We are also determined to do everything in our power to make sure this doesn't happen to anyone else again.'

It is unfortunate that they will probably do no time as they have White Affluenza.