Ladies And Gentlemen...I Present The Next President Of The United States 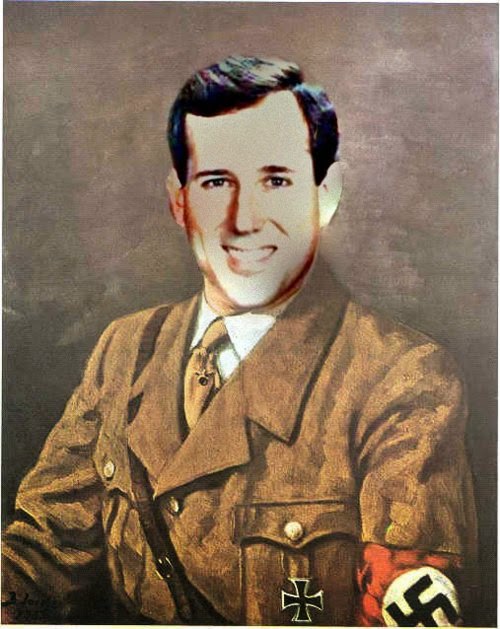 Former Pennsylvania Senator Rick Santorum has announced that he'll run for president in 2016.
Santorum came in second in the 2012 GOP presidential primary season, having won primaries and caucuses in 11 states.


He told The Washington Post that he was being underestimated.
“America loves an underdog. We're definitely the underdog in this race,” he told the paper.
The Post noted that Santorum should benefit from his 2012 organizing. His grass-roots operation, Patriot Voices, boasts 150,000 activists.
Santorum added that this time around he would broaden his message beyond his socially conservative base to reach blue-collar voters.
“Part of what I had to do last time was lay out my bona fides” on social issues, he said. “That's done.”
However, even during his 2012 bid Santorum, an ardent opponent of gay rights, attempted to move beyond hot button issues such as gay marriage but was quickly pulled back in by current events. And while many believe that a Supreme Court decision sometime next year will settle the issue, that's unlikely to quell the debate.
Here's a recap of Santorum's anti-gay rhetoric from the 2012 campaign trail.
Opposes same-sex marriage because a paper towel is not a napkin: “I can call this napkin a paper towel. But it is a napkin. And why? Because it is what it is. Right? You can call it whatever you want, but it doesn't change the character of what it is. … Why? Because there are certain qualities and certain things that attach to the definition of what marriage is.”
Opposes marriage equality because a tree is not a car: “It's like going out and saying, 'That tree is a car.' Well, the tree's not a car. A tree's a tree. Marriage is marriage.”
Opposes marriage equality because a napkin is not a car and a paper towel is not a chair: “This is a napkin. A napkin is what a napkin is. It isn't a paper towel. It isn't a car. You can call a napkin a car, but it doesn't make it a car. You can call a paper towel a chair, but it doesn't make it a chair. Marriage is what marriage is. It existed before there was the English language or a state.”
Claims the gay community waged jihad against him over gay marriage: “The gay community said, 'He's comparing gay sex to incest and polygamy. How dare he do this.' And they have gone out on a, and I would argue, jihad against Rick Santorum since then.”
Says gay sex is a sin: “Of course, the Catholic Church teaches that homosexuality is a sin. I'm a Catholic and I subscribe to the Catholic Church's teaching.”
Obama shattered America's traditional values: “Our traditional values shattered,” the male announcer in the ad The Only One said as a bride walks down the aisle with the caption, “Obama praises New York on same-sex marriage.”
Calls DADT repeal a “tragic social experiment”: “What we are doing is playing social experimentation with our military right now – that's tragic. I would just say that going forward we would re-institute that policy, if Rick Santorum was president.”
Supports gay soldier Stephen Hill: “I condemn the people who booed that soldier. That soldier is serving our country. I thank him for our service to our country. I'm sure he's doing an excellent job.”
Supports rights of gay Iranians: “They're killing people because they're gay, which is a grave moral wrong.”
Pledges his life against allowing gay couples to marry: “The battle we're engaged in right now is same-sex marriage, ultimately that is the very foundation of our country, the family, what the family structure is going to look like. I'll die on that hill.”
Claims gay people have equal rights: “I have nothing against gay people. They have rights of every other citizen.”
Would annul all marriages of gay couples: “Their marriages would be invalid. I think if the constitution says, 'Marriage is this,' then people whose marriage is not consistent with the constitution.”
Tired of being asked questions on gay rights: “I think I've answered that question probably more than any other candidate. On preoccupation with these questions with me can be a little trying after a while. I mean, I don't think you ask these questions of everybody else with the insistence that you do with me. And I understand the game. I mean, you know, you're trying to create, you know, the perception that this is what Rick Santorum talks about, because I get asked these questions all the time.”

I'm betting all his gay friends will vote for him...don't you?
Posted by Ulf Raynor at 5:48 PM