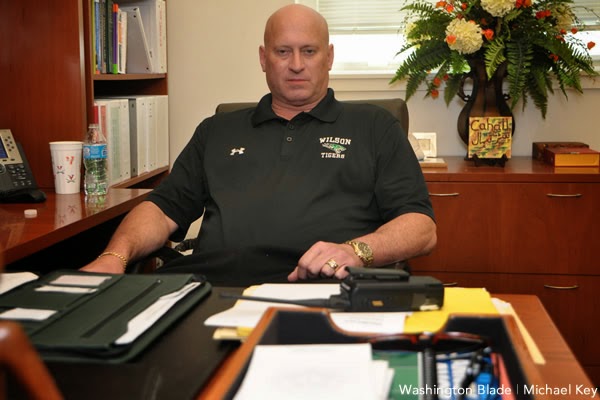 Peter Cahall, principal of Wilson High School in Washington DC, made national headlines last year when he came out as gay to his students during a lunchtime Pride Day rally in June this year.
In a letter to city council members, he has called the decision by John Davis, the chief of schools, to not renew his contract 'purely capricious and arbitrary.
' He added, 'I wish you well in moving the school system forward and want nothing more than for DCPS [District of Columbia Public Schools] to be successful. Unfortunately, when you have this type of adversarial relationship with the leaders of the schools, I do not believe that success is possible.'
According to the Washington Blade, Cahall had written to city council members saying that John Davis, the chief of schools, told him on December 2 that his tenure as principal would end at the conclusion of the current school year next June because he 'has not moved the school forward academically' based on student test scores.
The Washington Post however reports that during his tenure as principal, Wilson has boasted one of the city's highest numbers of Advanced Placement offerings and a graduation rate well above the city average. Parents have also credited him with helping to bring more order and efficiency to the crowded school where 1,700 students are enrolled. D.C. Council member Mary Cheh (Ward 3) has been quoted in the Post as saying that Cahall has been 'highly regarded' and 'well respected' by parents and that she was 'somewhat skeptical of the basis' for his termination.
'If you look at the whole course of his record and the esteem in which he’s held, I think it’s somewhat of a surprise. I would be interested to know how it’s warranted,' she said. His school has however posted significant disparities over time in math and reading proficiency rates for white and African American students. It is currently classified as a 'focus school,' the second-lowest of five tiers on a rating system used for federal accountability purposes, according to the Post.
In an email he sent to parents and students on Friday to inform them of his impending departure, he said he is 'determined to finish this school year with as much passion, energy and commitment that I have invested in the last six.' 'I have transitioned through the five stages of grief... Denial, anger, bargaining, depression, and acceptance. I am at the acceptance stage.'
Posted by Ulf Raynor at 4:53 PM