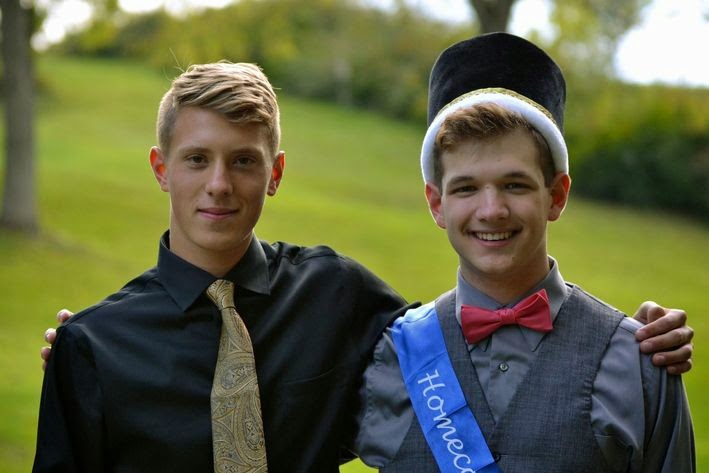 High school soccer player Michael Martin decided to stop hiding when he went to his school's homecoming dance this fall.
The All-State goalie at Musselman High School in Inwood, West Virginia, was on the homecoming court. When the Alan Jackson song Remember When played, Martin took to the dance floor for a slow dance with Jem, his boyfriend of two weeks.
'Only some people knew about me before the homecoming, so it was a shocker for some seeing me dance with another guy,' he writes in a column for Outsports posted on Tuesday (16 December).
'Jem and I danced all night to the most popular pop songs. But it was the slow dance that I most remember that night at the school cafeteria. It was the best night ever. Jem and I got asked a lot if we were together and we said yes. "That is so cute!" some girls said. It made us felt accepted.`
Two weeks earlier, they had played out a similar scene at Jem's school in a different county (they met through friends). Jem was crowned homecoming king of his school on that night. 'I held his hand when we went to get refreshments and when we took breaks from dancing,' he writes. 'It was a weird feeling for me, since I had just barely started coming out. I was nervous yet excited.' After Martin's homecoming dance, word spread throughout the school and while there was some backlash, there was also plenty of support.
'I sensed that some guys were looking at me differently. My friends even told me people were talking about me in a negative way in different classes. "He is a faggot now," I was told some people said. My friends courageously stood up for me and I am so proud to call them my friends.' Martin, 18, had a role model in soccer pro Robbie Roberts, the LA Galaxy player who came out publicly in 2013 during a break in his playing career.
He describes Rogers as 'my soccer hero' and 'the man who inspired me to come out.' 'I loved how he announced he was gay and did not quit playing soccer,' Martin writes. 'He gave me hope and confidence to be true to myself. Once he came out I started to contemplate doing the same myself and being proud of who I am. 'I have learned that being gay does not mean you are a lesser of a human being. If I can come out in a small town in West Virginia and be accepted, and dance with the homecoming king, it shows things are changing. 'I hope my performances and story help inspire other gay teens to show their true colors and not be afraid to play the sport they love.'
Posted by Ulf Raynor at 4:56 PM

This story made my day! Cute couple.