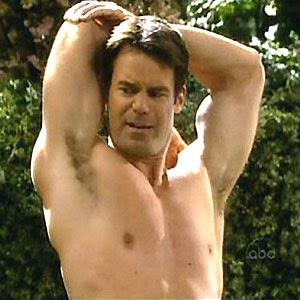 Former Desperate Housewives cast member Tuc Watkins has apologized for using the term 'blackface' to describe the Cam and Mitchell characters on Modern Family.
Watkins had been critical of the fictional gay couple in a Facebook post stating: 'It feels a little bit like the gay equivalent of “blackface.” It doesn't feel “modern” at all.’
Jesse Tyler Ferguson, who plays Mitch, defended the characters in an open letter to Watkins over the weekend.
Watkins replied today with an open letter to Ferguson expanding on his original remarks and apologizing for causing dissension among gays 'when we're all in this fight together.'
Here is his letter in its entirety:
Dear Jesse, I’m glad to see that a FB post can stoke a fire that burns in the LGBT community, and supporters of our community. Many doors have opened in gay people’s fight for equality. Civil rights, marriage rights, and depictions of us individually and collectively on television.
Great strides have taken us from tolerance into acceptance and towards true equality. Stereotypes still exist. They probably always will. And while the truth is usually somewhere in the middle, stereotypes polarize us. No news there. But while an explanation of a stereotype can make good, logical sense, it still leaves the stereotype intact.
I’m glad to have played gay characters, but at the same time have been frustrated by the stereotypes I feel I've been party to in playing those roles. I’ve begged wardrobe designers so I wouldn’t have to wear paisley shirts, directors to reconsider a “snap” at the end of a scene, and writers to remove “Hey, gurl!” from dialogue.
I did it because when I was growing up, trying to figure out where I fit it in, I couldn't seem to locate a role model. The stereotypes I saw made me think, “Well, I don’t identify with that so I must not be gay.”
I can appreciate that one man’s roadblock may be another man’s role model. I feel like my growth was stunted, but understand that another person’s may have been bolstered. I believe that, as a community we want to make the path easier for those who come after us. I want that.
I’m certain you do to. Some audience members can laugh through a character, but it can also distance others. We each come to the fight with our own baggage…as well as our own weaponry. “Revolutionary times call for revolutionary means.”
My comments were extreme, and my use of the word “blackface” inexcusable. I regret creating dissension among the ranks, especially when we’re all in this fight together. I see your point. I hope you’ll consider mine.
Sincerely,
Tuc
Posted by Ulf Raynor at 5:15 PM

And that is how you apologize for something you've said wrong. Take a lesson bigots and haters.