Has The Supreme Court 'Tipped Its Hand' In Favor Of Gay Marriage? 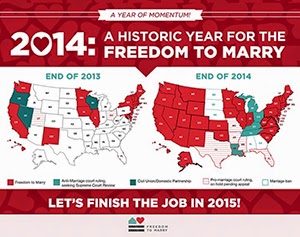 What does it mean that the Supreme Court has allowed gay couples in several states to marry, and is expected to do the same in Florida, before it has heard a case on the issue?
Aaron Bruhl and many other legal experts believe it's a signal of how the high court will ultimately decide the issue.


A judge's ruling striking down Florida's gay marriage ban expires on January 5. The state's request to delay implementation of the ruling as it pursues an appeal was denied.
While hurdles remain – Florida officials argue that the ruling only applies to one county – the Supreme Court's move is its boldest yet. It is the first case in which it is allowing a decision to take effect before an appeals court has weighed in. (Though it should be noted that an appeals court also refused to delay implementation.)
Bruhl, an associate professor of law at the University of Houston, earlier this week told The New York Times that by allowing gay couples to marry in numerous states before it has considered the issue, the justices have sent a message.
“It's hard to imagine that now, after allowing that to happen, that the court would say there is no right to same-sex marriage,” he said. “I think the court has, in a way, tipped its hand on what the final outcome would be.”
Posted by Ulf Raynor at 5:01 PM