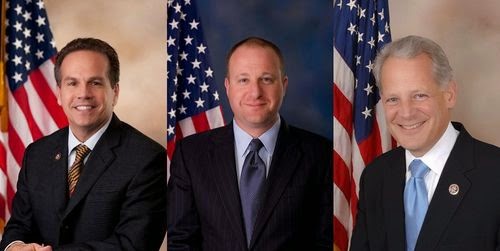 Four House Democrats introduced an LGBT protections resolution on Monday.
“When intolerance occurs anywhere, everyone has an obligation to take a stand, and Congress doesn't get a waiver on that,” New York Rep. Steve Israel, who chairs the House Democratic Policy and Communications Committee, said during a press call.


Also behind the resolution are Reps Jared Polis of Colorado, Andre Carson of Indiana and David Cicilline of Rhode Island.
They said that such protections are needed following passage of a so-called religious freedom law in Indiana which opponents argued was a response to a federal court's ruling striking down Indiana's ban on gay marriage and would allow businesses to turn away gay couples.
The backlash led Republican Governor Mike Pence to ask lawmakers for a “fix,” which included adding LGBT protections to the law.
“In the wake of the backlash of Indiana's misguided law, it is clear that the vast majority of Americans oppose this type of discrimination,” said Carson.
Cicilline is expected to introduce a full bill later this spring, The Hill reported.
“Most Americans would be surprise to learn that, in most states, a gay couple can be married on Saturday, post photos of their wedding on Sunday and then be fired on Monday for no reason other than the fact that they are gay,” said Cicilline.
Cicilline said his bill would protect the LGBT community from discrimination in the areas of housing, employment and public accommodations.

Sadly, though a very commendable attempt by Dems on behalf of the LGBT community, I don't think this stands a snowballs chance in hell.
Posted by Ulf Raynor at 6:03 PM