Rand Paul Is An Asshole 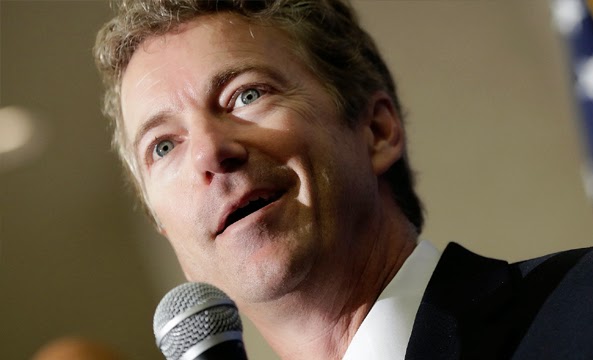 Appearing Sunday on CNN's State of the Union, Kentucky Senator and presidential candidate Rand Paul explained how his opposition to gay marriage does not contradict with his libertarian ideology.
In an interview with Dana Bash, Paul was asked about the apparent contradiction.


“In New Hampshire, you said, 'I will fight for your right to be left alone.' I realize that you believe gay marriage is a state issue, but why do you believe, just as a core principle, as a libertarian, that people should be left alone but not when it comes to their right to marry somebody they love?”
“I do believe people ought to be left alone,” Paul answered. “I don't care who you are, what you do at home or who your friends are, where you hang out, what kind of music you listen to. What you do in your home is your own business. That's always been who I am. I am a leave-me-alone kind of guy.”
“But not when it comes to marriage,” Bash said.
“I think there's a religious connotation to this. I also believe people ought to be treated fairly under the law. I see why if the marriage contract conveys certain things, that if you want to marry another woman, you can do that and have a contract. But the thing is that the religious connotation of marriage that has been going on for thousands of years, I still want to preserve that,” Paul said.
Paul went on to say that gay couples could “have contracts.”
“You could have both the traditional marriage, which I believe in and then you could also have the neutrality of the law that allows people to have contracts with another,” he said.

We don't need your permission Rand and fuck your contracts...that boat has sailed and assholes like you did your best to stop any form of gay union...only now, when it looks like marriage equality will become nationwide, do you Republican/Libertarians (really whats the difference?) want to "talk" of possibly offering civil unions or domestic partnerships.
No deal, shove your anti-gay, pseudo-religious quackery up you conservative twats.
Posted by Ulf Raynor at 6:23 PM

The difference is, libertarians really are all about liberty, as crazy as that sounds. Anything goes as long as all participants are giving informed, non-coerced consent.

As for what Republicans stand for, I'll get back to you if I can think of something.

Oh yeah, sure, they strongly believe that majority vote is the rule of thumb.
Leaving marriage and gay rights up to state by state, community by community popular vote. With that, we could probably expect equality under the law when hell freezes over...thanx, I'll take a pass on that bullshit.

One of us is confused.

No Republican is going to espouse majority rule, that sort of being the point of a Republic.

No libertarian is going to agree with majority vote because when they say all participants must agree they mean 100% not 99.99% There's no point in having a vote because whoever disagrees can take his ball and go home at any time.

So under libertarianism if two people want to get married. They, the ones doing, it must agree. But the crazy old Baptist down the street can like it or not but has no say as it does not involve him or his property. Yes, this does mean he doesn't have to perform the ceremony or allow the use of his church if he doesn't want to.

See how this works? everybody gets what they have a right to.

Libertarianism is essentially the application of "The Golden Rule" to politics. AKA the Non-Agression Principle". Anything that is not that is not Libertarianism, but either a straw-man argument or phoney opportunist.

Rand Paul, for example, has explicitly said he is not a libertarian, and all real libertarians vehemently agree.

And by saying that because there is a Religious element to marriage, the Federal Government has a compelling interest to involve itself, shows that he's not much of a Constitutionalist either.

So, don't judge libertarianism based on stuff you've heard from people who are either are completely ignorant about it or are exploiting your ignorance for shameful political purposes.

Read "The Anatomy of the State" by Murray N Rothbard (A pamphlet really.) and then I'll stop assuming that you are ignorant about libertarianism.

Until then, no offence, but I sometimes get the impression you don't know anything about it that is true.

Hardly confused at all...here's why, I am completely disenfranchised with both the Dems and Repubs, and over the course of about three years I've gone to two different Libertarian rallies, one near Pittsburgh and one in my home state of West Virginia.
The first thing I took note of was the all the friggin guns...now being from WV, I'm use to seeing that, and I'm all for the peoples right to bear a gun, but brandishing high powered rifles and AK 47s in front of small children was just a bit much for me.
Both rallies, at the beginning, espoused the usual litany of the parties Libertarian views on small government and an empowered personal life free from governmental conbstructs...but it's when later speakers begin discussing state sovereignty and activist judges, that the real face of the Libertarian party began to reveal itself.
Was this really about Libertarian views or just another bunch of leftist gun lovers pushing a majority rule, gay is icky agenda?
I certainly hope your not going to tell me this element isn't a strong and vocal force in the Libertarian party.
Sorry, I stand by my original statement.