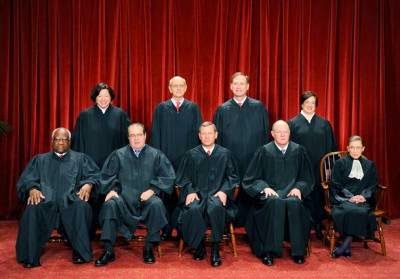 As expected, the US Supreme Court appeared sharply divided today during oral argument for marriage equality cases in four states that could make gay marriage legal throughout the country. Justice Anthony Kennedy, who cast the deciding votes two years ago in rulings that gutted the Defense of Marriage Act and allowed same-sex marriages to resume in California, sounded cautious about doing so again.
'The word that keeps coming back to me is "millennia,"' Kennedy said during the hearing. 'This definition (between a man and a woman) has been with us for millennia. It's very difficult for the court to say, "Oh well, we know better."'
Chief Justice John Roberts echoed that sentiment saying: 'You're not seeking to join that institution, you're seeking to change what the institution is.' But Kennedy also remarked that the 'principle purpose of marriage was to afford dignity to the couples, which is denied to same-sex couples.'
Some of the conservative justices mentioned familiar arguments in their questions and remarks. Justice Samuel A. Alito Jr. asked whether groups of four people must be allowed to marry if they were to rule for marriage equality and Antonin Scalia wondered if some members of the clergy would be required to perform same-sex weddings ceremonies that are against their religious beliefs.
The more liberal justices had a far different take. 'You are not taking away anything from heterosexual couples' with same-sex marriage, Ruth Bader Ginsberg said at one point. Justice Sonia Sotomayor asked: 'How does withholding marriage from one group increase the value to the other group?' The court is expected to hand down its ruling in June in what is six cases from four states that have been consolidated from Kentucky, Michigan, Ohio, and Tennessee.
The justices are weighing whether the Fourteenth Amendment of the US constitution requires a state to license a marriage between two people of the same sex and if it requires a state to recognize a marriage between two people of the same sex when their marriage was lawfully licensed and performed out of state.
Their ruling will determine whether same-sex marriage will become legal nationwide. It is currently legal in 37 US states plus the District of Columbia. If the court does not rule in favor of marriage equality, individual states would still have the ability to ban same-sex marriage.
Posted by Ulf Raynor at 6:15 PM