If It Can Happen In My Home State... 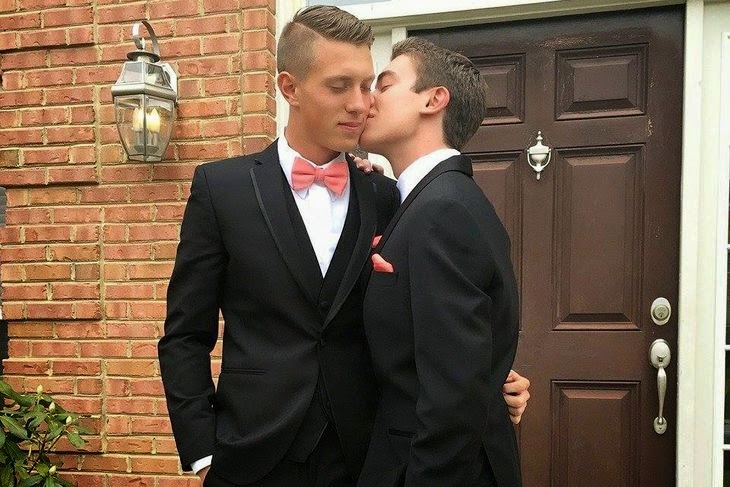 They were just like any other couple at last weekend's Mussleman High School senior prom - except they weren't.
Michael Martin, a Mussleman senior, and his boyfriend Logan Westrope, were the only same-sex couple at the event held at The Heritage Hall in Inwood, West Virginia.
'We knew this would be a night to remember,' Westrope, who attends a different school, tells Outsports.
'We walked in, checked in with our tickets, and were off to have fun! At first we were both a little hesitant to hold hands, not knowing how the rest of the student body would react. But after a short while, we were always next to each other and danced together the whole night.'
Martin is a three-sport standout athlete in swimming, tennis and soccer making all-conference in the first two sports and all-state as a soccer goalie. Westrope attends Hedgesville High School where he is on the tennis team.
The couple has been dating for four months and Martin asked Westrope to be his prom date last month. Among the songs the pair slow danced to were Sam Smith's Stay With Me and John Legend's All of Me. 'At the moment when the slow songs played, we would just stare into each other's eyes and would think of how lucky we are to have each other,' Westrope says.
'We didn't hear any negative comments ... a lot of people would come up to us (especially the girls) and say, "You both are so cute!" or "You guys look great!" Once we left the prom, I remember Michael saying to me in the car, "Logan, this is our last prom and I'm so glad I got to spend it with you." I couldn't have asked for a more perfect night.'

Well, congrats to the 2 young men. Mussleman High, huh? Hi, muscleman! All hail the musclemen of West Virginia (& for that matter - the rest of the world! Yeah, musclemen! Keep 'it' up! But pull your pants down. LOL)
Looked up Inman. In the far eastern part of the Eastern panhandle of the state. In Berkeley Co, which is the 2nd oldest & 2nd most populous county of WV. Always like to add to my geographic knowledge.
Ulf*, you said you're originally from Georgia. Which county of that state? (if you don't want to say which town) Know where Pavo is - in the southern part of GA?
And which county do you live in in WV? Speaking of musclemen you must know of Erik Funkhouser, the bb from Wheeling. Besides a smokin' hot bod (w those exceptional calves! Love muscular calves!) he has IMO such a lovable face. Bless him. And his family.
And bless you! All you love & in all you do. May all things work together for good in your life & affairs.
BTW, I live in Washington Co, PA - not so far away.
*Is that really your 'real' name? Were you perhaps christened Ralph - just a guess from left field - but didn't think that name was macho enough?