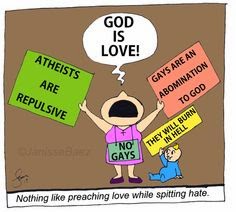 North Carolina Christian Pastor John Pavlovitz penned a blog last autumn which quickly went viral. He wrote about what he promised to do if his children grew up and told him that they were gay. In short, he vowed to love them and support them and spread a message of love and acceptance to others.
Having followed developments in Indiana over the last couple of weeks, with the passing of its controversial Religious Freedom Restoration Act, he was dismayed by an interview that former Arkansas Governor Mike Huckabee gave on Wednesday in which he attacked LGBT activists, saying that they wouldn't be satisfied until there were no more churches or Christians in America.
Pavlovitz has written the following open letter to Huckabee…
A Message To Governor Huckabee, And To All Those Fighting Nonexistent Wars
Yesterday, in the aftermath of the changes made to the Indiana Religious Freedom Restoration Act, former Arkansas Governor Mike Huckabee responded in an interview that LGBT activists 'won’t stop until there are no more churches.'
He implies here that there are no LGBT people of faith, and that all LGBT people are hostile to religion.
Both of these assumptions are terribly incorrect.
Dear Governor Huckabee, is this really what you think this week has all been about; a war on church?
Do you think this is all part of systemized, insidious campaign to destroy organized religion?
Do you think that today there is celebration across the country, because Christianity is one step closer to extinction?
If that is what you believe has been happening here, I am more disappointed than I can express.
This week has not been the LGBT community against Jesus.
It has not been the LGBT community against Religion.
It has not been the LGBT community against The Church
It has not been the LGBT community against anything except any discrimination that prevents their full participation in the life of the country they live in, love, and contribute to.
The events of the past few days have not be an attack on Faith, but rather the honest, passionate, raw-throated cries to be considered equal; in restaurants, bakeries, city halls, and yes, even in churches.
Every week I speak to and hear from thousands of people; not just the LGBT community, but to their children, their best friends, their parents, and to people who, like me, are for them.
We who have spoken out this week are from every walk of life, from every political affiliation, from every religious tradition, and from every kind of distinction you can make.
We are not against Christianity. I have been a pastor for nearly the past two decades.
We are not against you or Republicans or Conservatives, or God or marriage or family or America.
It is because we are for all of those things, that we speak and push, and scream until our voices fail.
It is not an act of war. It is an affirmation of life – of all life.
Governor Huckabee, there will always be churches (Jesus assures us of this in Scripture), and many LGBT people and those who love them will be in those churches.
As a pastor, as long as I am alive and ministering, I can promise you that they will be mine.
I wish you could see that this is not a day that anyone is gloating or thumping their chests or dancing on the eventual grave of Religion.
Yes, there is dancing, but it is the dance propelled by the wild, explosive flood of hope that comes when you feel heard and seen and called equal.
Not everything needs to be a war.
Not everything needs to be a fight.
Not everything is about two opposing sides.
We’re all together in this life, seeking the very same things; life, liberty, and happiness.
I pray that you will see this deepest truth; you and those who might be conditioned to the battle, unable to lay down your weapons.
As a Christian, perhaps for the rest of this Holy Week, you might reflect upon the character of Christ, paying close attention to how he responded to those who differed from him, and to the 'the least'; those who were vulnerable and hurting and desiring to be loved.
If you want to give the world outside of the Church a worthy Christian testimony this week, please consider an Easter cease-fire.
Please end this war.

'Blessed are the peacemakers.' – Jesus

A voice of reason in an ocean of hate.
Posted by Ulf Raynor at 3:00 PM

Haters in the name of jesus are going to hang onto their bigotry till the grave. It's such a shame they don't see how much better life is not carrying around all that hate. This pastor gets it.