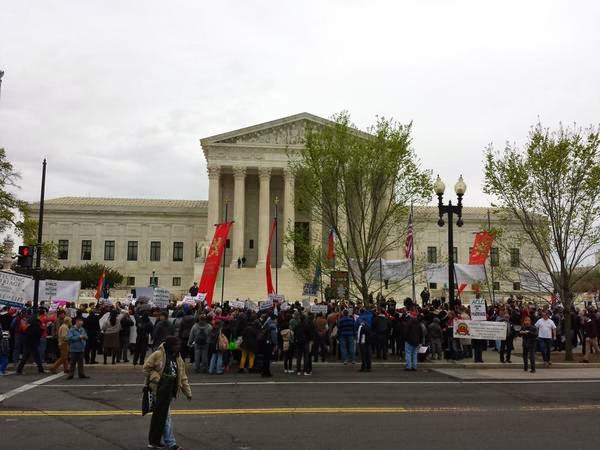 Opponents of marriage equality marched on the Mall on Saturday, just days before the Supreme Court hears a case challenging gay marriage bans in four states.
The National Organization for Marriage (NOM) claims that more than 7,000 people were bused in to participate in its March for Marriage.


The march wound its way up the Mall to the Supreme Court Plaza, where “several knelt to pray,” according to The Washington Post.
Archbishop Joseph Kurtz of Louisville, Kentucky, president of the U.S. Conference of Catholic Bishops (USCCB), told the crowd: “Children don't need experiments. They need the love of their mother and father, wherever possible.”
The Post reported that the crowd was overwhelmingly Latino.
New York State Senator Ruben Diaz Sr., a Democrat from the Bronx and an ordained minister of the Church of God, led opposition to New York's marriage law. In 2011, he led a rally of marriage equality opponents in the Bronx.
In a press release, Diaz said that more than 6,000 people were being bused in from New York to participate in the march.
NOM President Brian Brown told the crowd that marriage equality supporters might not win at the Supreme Court.
“They think that they've won, but they thought they won Prop. 8, too,” he said, a reference to California's now-defunct voter-approved constitutional amendment limiting marriage to heterosexual unions. Ironically, it was a Supreme Court ruling that toppled California's ban.

NOM's website claims 10,000 showed for yesterdays rally, people who actually attended said it was smaller than last years attendance and that was estimated at 2k.
Like last year, once again, many in attendance were brought in by buss and largely Latinos, who when questioned, didn't even know why they were there.
Posted by Ulf Raynor at 5:28 PM