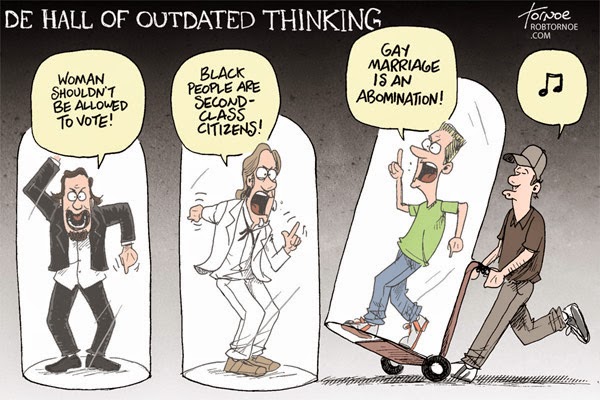 Google, Microsoft, Facebook and Twitter are among the more than 100 tech companies calling on state legislators to adopt LGBT protections.
The statement, initially released last week, calls on states to adds sexual orientation and gender identity as protected classes to their civil rights laws.


Last week, governors in Arkansas and Indiana signed revised versions of so-called religious freedom bills after business leaders and gay rights advocates voiced opposition to the measures. Critics said that the laws' broad language might be used by businesses to refuse service to gay men and lesbians.
“In more than twenty states, legislatures are considering legislation that could empower individuals or businesses to discriminate against LGBT people by denying them service if it they felt it violated their religious beliefs,” the statement reads in part.
“To ensure no one faces discrimination and ensure everyone preserves their right to live out their faith, we call on all legislatures to add sexual orientation and gender identity as protected classes to their civil rights laws and to explicitly forbid discrimination or denial of services to anyone.”
Chad Griffin, president of the Human Rights Campaign (HRC), the nation's largest LGBT rights advocate, applauded the move.
“The unified message from these business leaders is clear: Pass LGBT non-discrimination protections and pass them now,” said Griffin. “Until legislators finally step up to the plate and take action, this issue is not going to go away. It’s time for elected officials to listen to the overwhelming voice of fair-minded Americans demanding equality for their LGBT loved ones, friends, and neighbors. No American should risk losing their job, be denied housing, or refused service simply because of who they are or whom they love.”
More than 100 tech leaders signed on to the statement, including Salesforce CEO Marc Benioff, Microsoft CEO Satya Nadella, Twitter CEO Dick Costolo and Facebook CEO Mark Zuckerberg and Facebook COO Sheryl Sandberg.
Posted by Ulf Raynor at 4:30 PM