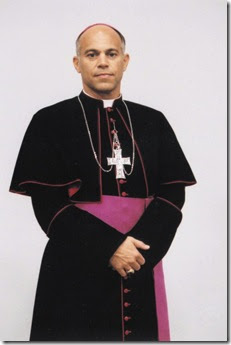 SAN DIEGO -- The mother of anti-gay Archbishop-elect Salvatore Cordileone, arrested in San Diego over the weekend on suspicion of drunken driving, told CBS 8 that she is going to be praying for him when he takes over in San Francisco in October.
"It's going to be a tough job because, you know, he always preached against same-sex marriage," Cardileone's mother, Mary, said in the interview. "The gays are very active there."
Mother is correct. Her son is widely known as the "Father of Proposition 8" for his adamant opposition to marriage equality. As the Roman Catholic bishop of Oakland, Cardileone gave at least $6,000 of his own money to support Prop 8 and rallied Catholics to donate money and vote to take away same-sex marriage in California.
Cardileone, 56, was arrested early Saturday morning and booked into San Diego County Jail downtown on suspicion of driving while impaired. After spending the night in the so-called "drunk tank," he was released at 11:59 am Saturday on $2,500 bail, according to the Sheriff's Department.
A San Diego native who went to Crawford High School, Cardileone now has a public relations mess to clean up. He started by issuing the following statement:


"While visiting in San Diego this past weekend, I had dinner at the home of some friends along with a priest friend visiting from outside the country and my mother, who lives near San Diego State University. While driving my mother home, I passed through a DUI checkpoint the police had set up near the SDSU campus before I reached her home, and was found to be over the California legal blood alcohol level.
"I apologize for my error in judgment and feel shame for the disgrace I have brought upon the Church and myself. I will repay my debt to society and I ask forgiveness from my family and my friends and co-workers at the Diocese of Oakland and the Archdiocese of San Francisco. I pray that God, in His inscrutable wisdom, will bring some good out of this."

CBS 8 quoted experts who said the DUI arrest will likely have little impact on Cardilone's elevation to Archbishop of San Francisco. The elaborate installation ceremony is still scheduled at St. Mary's Cathedral for Oct. 4, five days before his scheduled court appearance. Pope Benedict XVI, who picked the next Archbishop, is the only Church official who could derail the appointment.
As for the DUI arrest, Cardileone's mother elaborated on her son's statement and said he went to a party in El Cajon with her and his friend, a priest visiting from Germany. She blamed the hosts for continuing to fill the Archbishop-elect's wine glass and said she didn't want to be "a bossy mother. I should have told him that he was drinking too much wine." She continued to make excuses for her son by saying that he was driving good, but got caught at the DUI checkpoint near San Diego State University.
She said she was proud that her son told the truth to DUI officers that he has been drinking ... but didn't explain why Cardilone only told the police that he was a priest when in fact he is one of the highest-ranking officials in the Roman Catholic Church.
To date, it remains unknown the blood-alcohol level of Cardileone, except that it exceeded the legal limit of 0.6. Authorities said that Cardileone also failed the field sobriety test.
San Diego, California News Station - KFMB Channel 8 - cbs8.com
Posted by Ulf Raynor at 5:05 PM