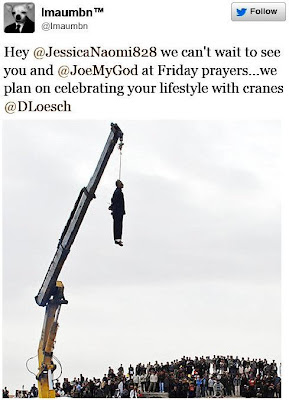 Gay blogger Joe Jervis of Joe.My.God reports he received death threats after tweeting information about the Family Research Council's history of hateful activism.
After last week's shooting at the headquarters of the conservative Family Research Council, Jervis tweeted out links to examples of the organization's antigay efforts and, later, its president Tony Perkins's association with white supremacist groups. He also tweeted, "Remember how the FRC and all the rest declared it a 'badge of honor' to be called a hate group by the SPLC?"
That didn't sit well with conservative pundits who defended FRC. In a blog post published Monday, Jervis posted two images from Twitter showing the kinds of responses he got. One is from CNN contributor Dana Loesch, who tweeted, "I'm blocking the Joe guy apparently celebrating the FRC shooting, fyi. He worked really hard to incite hate last week, he needs to rest."
Another Twitter user sent Jervis a photo of a person hanged from a crane with the caption, "We plan on celebrating your lifestyle with cranes."
Jervis informed Twitter Support, but was informed that the message was not in violation of Twitter's rules.
"We have a policy against violent threats, but the content of this account lacks the specificity to meet the criteria of an actionable threat. Receiving these types of messages can be frustrating; however, removing content does not resolve the issue, but instead can make the situation worse," Twitter Support responded to him via email.
Jervis wrote that he wasn't surprised by Twitter's response and that he regularly receives similar messages via email. He also pointed out something else that his critics seem to have missed: Last Wednesday, the day of the shooting, he posted the joint statement issued by dozens of LGBT rights groups denouncing violence and sending well wishes to the shooting victim. He added to the statement, "I work alone, but I too endorse the above statement."
Posted by Ulf Raynor at 5:05 PM

I've never got into Twitter, it just never grabbed me. After reading this, I'm sickened by Twitters in-action to remove this post. SICK, TWITTER, SICK!!! Joe, keep well.