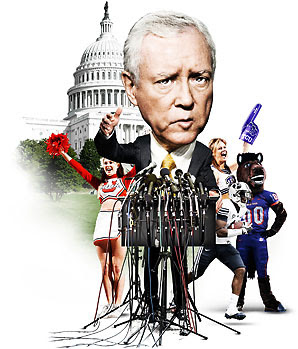 Republican Senator Orrin Hatch of Utah has said he does not support a constitutional amendment banning gay marriage, breaking with Mitt Romney on the issue.
“Well, my personal belief is that we should not discriminate against anybody, but I do draw the line at the definition of marriage,” Hatch told SiriusXM's Michelangelo Signorile.
Hatch, who in 2006 voted in favor of a constitutional amendment which would define marriage as a heterosexual union, added that he had not “even considered” such an amendment and believed “that the states should be able to make their own determination” on the issue.
“There are about, what, six states that have done it? They've chosen to do that. I don't agree with that, because I believe in the sanctity of the marriage covenant and the traditional definition, but the states have a right to do it,” he said.
Romney was among the Republican candidates who last summer signed a National Organization for Marriage (NOM) pledge in support of a federal constitutional amendment banning gay marriage.
Hatch, also a prominent Mormon, said he was unaware of Romney's position on the issue.
Gary Bauer, president of the Christian conservative American Values, criticized Hatch on Thursday.
“Of course as you know that's not the goal of the gay rights movement,” Bauer told Signorile. “The goal of the gay rights movement is to take a state that has same-sex marriage and to use that state as a battering ram and a lawsuit before the Supreme Court to force every state to have same-sex marriage. So I'm sorry that Orrin fell for it. But if only your side was willing to allow each state to make the decision on their own. I think Orrin Hatch may have had a bad moment or he forgets what's happened in the last 30 years – courts forcing radical social change on the American people.”
You know, such things as a woman's right to choose,  forced segregation of African-Americans in public schools and a host of other rulings that wouldn't allow christian fundamentalist to force their religious beliefs on everyone else.
Posted by Ulf Raynor at 5:19 PM