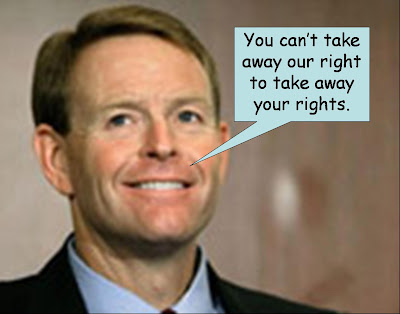 Editor’s Note: The following statement may be attributed to Mark Potok, Senior Fellow of the Southern Poverty Law Center and editor of its Intelligence Report and Hatewatch blog.
Yesterday’s attack on the Family Research Council and the shooting of a security guard there was a tragedy. The Southern Poverty Law Center (SPLC) deplores all violence, and our thoughts are with the wounded victim, Leo Johnson, his family and others who lived through the attack.
For more than 40 years, the SPLC has battled against political extremism and political violence. We have argued consistently that violence is no answer to problems in a democratic society, and we have strongly criticized all those who endorse such violence, whether on the political left or the political right.
But this afternoon, FRC President Tony Perkins attacked the SPLC, saying it had encouraged and enabled the attack by labeling the FRC a “hate group.” The attacker, Floyd Corkins, “was given a license to shoot an unarmed man by organizations like the Southern Poverty Law Center,” Perkins said. “I believe the Southern Poverty Law Center should be held accountable for their reckless use of terminology.”
Perkins’ accusation is outrageous. The SPLC has listed the FRC as a hate group since 2010 because it has knowingly spread false and denigrating propaganda about LGBT people — not, as some claim, because it opposes same-sex marriage. The FRC and its allies on the religious right are saying, in effect, that offering legitimate and fact-based criticism in a democratic society is tantamount to suggesting that the objects of criticism should be the targets of criminal violence.
As the SPLC made clear at the time and in hundreds of subsequent statements and press interviews, we criticize the FRC for claiming, in Perkins’ words, that pedophilia is “a homosexual problem” — an utter falsehood, as every relevant scientific authority has stated. An FRC official has said he wanted to “export homosexuals from the United States.” The same official advocated the criminalizing of homosexuality.
Perkins and his allies, seeing an opportunity to score points, are using the attack on their offices to pose a false equivalency between the SPLC’s criticisms of the FRC and the FRC’s criticisms of LGBT people. The FRC routinely pushes out demonizing claims that gay people are child molesters and worse — claims that are provably false. It should stop the demonization and affirm the dignity of all people.
All anyone need ever know about Tony Perkins is the simple fact he was best buds with David Dukes, the grand wizard of the KKK..pretty much sums the guy up completely.
Posted by Ulf Raynor at 5:28 PM