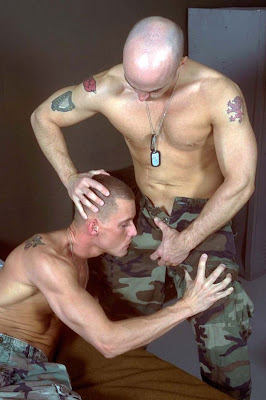 OutMilitary.com just got a whole lot easier to access with the launch of the new OutMilitary.com official mobile app, available at iTunes and Google Play Market.

"OutMilitary.com developed the 'NEAR ME' and 'LOCATIONS' function on the mobile app to make it easier for gay service members, veterans and their admirers, to find each other," said Knittel. "'NEAR ME' is essentially an instant messaging by text feature, gay men are already used to using phone apps for gay dating. OutMilitary.com is just giving them one that is military-specific."

OutMilitary.com creator, John McKinnon, says, "While gay service members no longer have to violate their oath of honesty and integrity in order to serve, knowing who is gay on base or aboard ship can be nearly impossible." McKinnon continues, "Now, the app gives them a powerful tool to find and connect with one another right on their smartphone, they can literally 'see' other gay service members on their base, ship, wherever."

OutMilitary.com has caught media attention having been reported on by Reuters, NPR, ABC News, Huffington Post and Sirius XM among other organizations. Launched in December, 2010, OutMilitary.com quickly became the go-to place for the estimated 65,000 active-duty gay servicemen and women and 1 million LGBT veterans.