Satire From The Onion:Gay Marine Beaten To Bloody Pulp To Fire Up RNC Crowd 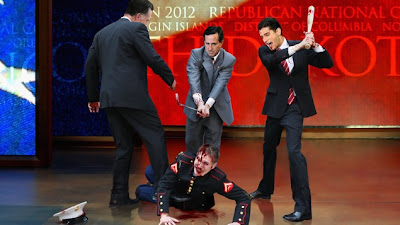 TAMPA, FL—Excitement on the floor of the Republican National Convention reached a fever pitch Tuesday, as attendees were treated to a rally at the Tampa Bay Times Forum featuring the savage beating of an openly gay Marine.
Amidst the deafening roar of applause and anti-gay slurs, the highly decorated veteran, who had just returned from his third tour of duty in Afghanistan, was dragged around the stage in a blindfold and flexicuffs while party leaders took turns pummeling his body into a near-lifeless pile of mangled flesh.
“Who’s ready to get this convention started? I said, who’s ready to get this convention started?!” shouted former Pennsylvania senator Rick Santorum, one hand clutching the gay Marine’s bloodstained fatigues and the other cocked toward his face. “I want to hear some noise if you think it’s time for a change in Washington—if you think this administration is out of touch with America’s problems.”
“Out of touch,” he repeated, drilling a fist into the combat veteran’s kidneys with each syllable. “Let’s give it up for Romney-Ryan 2012!”
As the frothing crowd of more than 5,000 delegates, alternate delegates, and volunteers leapt to their feet, Sens. Marco Rubio and Rand Paul charged out onto the stage with baseball bats. According to sources, Rubio went to work on the gay man’s legs while Paul concentrated on his back and abdomen, sending attendees seated in the front row into fits of delight each time they were splattered with blood.
Chris Christie, the brash New Jersey governor and rising GOP star followed close behind, ratcheting up the crowd’s enthusiasm by laying into the Marine’s shaved head with a sock full of quarters, leaving his broken body crumpled up beneath a giant banner reading “We Can Do Better,” one of the convention’s themes.
Witnesses said the dazed veteran—who recently married his longtime partner—fought back fiercely and did make an attempt to escape. It was rebuffed, however, when presidential nominee Mitt Romney suddenly emerged from backstage, motioning for party members to back away and give him space.
“Before I accept this nomination, I just want to thank you all for your continued support and let you know how much it means to Ann and I and the rest of our family,” Romney told the hushed crowd, rolling up his sleeves and removing a pair of brass knuckles from his jacket pocket. “So please join me in harnessing the amazing energy in this room tonight, and let’s take it with us on the difficult road ahead.”
“All the way to the White House!” he added to a rapturous swell of applause before bashing the gay husband and father’s face toothless and tossing his limp frame into the crowd.
As frenzied convention-goers bandied the Marine’s body around the arena like a beach ball, the show continued on stage with Rep. Michele Bachmann (R-MN) invoking scripture to scare a pregnant teenager out of having an abortion while a scale model of a Planned Parenthood clinic burned in the background.
Eliciting one of the biggest cheers of the night, House Speaker John Boehner then hog-tied an inner-city welfare recipient and backhanded him over and over until he promised to work harder and provide for his family instead of relying on government handouts.
“That was exactly what the party needed,” Jimmy Prudhoe, a delegate from Colorado, told reporters later. “We got the convention off to a rousing start that somehow managed to reaffirm who we are as Republicans and what we truly believe in. And boy, was it a heck of a lot of fun to watch, too!”
Prudhoe added that he couldn’t wait until the next day of the convention, when vice presidential nominee Paul Ryan was scheduled to personally prevent a laid-off factory worker from receiving dialysis until he finds the money to pay for it
Posted by Ulf Raynor at 5:11 PM

Please forgive me if I sound stupid here, but is this for real or was it some staged show? Surely beating a man to near death by presidential canidated is a crime and the police should be called!!

Not even funny, and zero resemblance to the actual convention or the actual party. Just because most Republicans have a different idea of marriage doesn't mean that they want to beat us to some sort of bloody pulp.

Hey Bear Paul, baby the title has the word satire in it.
It's from the Onion a satirical blog.

Hey Steve, you've obviously been living in a cave somewhere, please feel free to read more news articles on this very blog and educated yourself about the Republican party.
They don't just have a difference of opinion, their intention for homosexuals in general is quite fucking clear, ever since they've allowed the religious right to usurp the party.
If your to blind too see this, then your visiting the wrong fucking blog and should go hang out at the FRC site. (For your own safety, I would advise against letting em know your a mo')

Thanks. Sorry I misunderstood. Thanks for the clarification.

Bear Paul your heart is in the right place; can't say that about steve