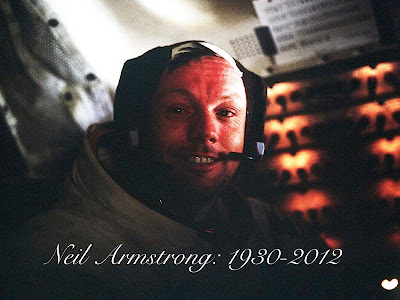 Neil Armstrong, the first man to walk on the moon during the 1969 Apollo 11 mission, has died, following complications resulting from cardiovascular procedures. He was 82.

Armstrong's words "That is one small step for (a) man, one giant leap for mankind," spoken on July 20, 1969, as he became the first person ever to step onto another planetary body, instantly became a part of history.

Those few words from the Sea of Tranquillity were the climactic fulfillment of the efforts and hopes of millions of people and the expenditure of billions of dollars. A plaque on one of the lander's legs that concluded "We came in peace for all mankind," further emphasized that Armstrong and fellow astronaut Edwin "Buzz" Aldrin were there as representatives of all humans.

Armstrong is survived by his wife, two sons, a stepson, a stepdaughter, 10 grandchildren, and a brother and sister.

"Neil Armstrong was a hero not just of his time, but of all time," President Barack Obama said via Twitter. "Thank you, Neil, for showing us the power of one small step."
Posted by Ulf Raynor at 9:49 PM