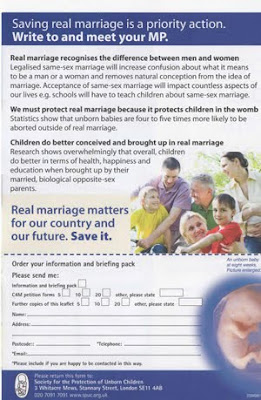 According to Pink News, an organization called The Society for the Protection of Unborn Children has been distributing a leaflet in the UK that claims the legalization of same-sex marriage will lead to a rise in abortions. Besides saying "We must protect real marriage because it protects children in the womb," it's pretty low on details. So I gave them a call to get the 411:
VICE: I just wondered if you could give a little more information about the whole protecting marriage/protecting children in the womb thing?
SPUC: You will find more detailed data and references on our site. It is not a claim being made without evidence to back it up. The core data behind this is based on looking at the figures for abortions, and the data indicates that vastly more abortions take place with women who are not married than those who are.
Right...
Now, the issue there is that marriage as the ideal set up for conceiving, bearing, raising children, has been undermined in a number of ways in recent years. Things like withdrawing fiscal benefits from married couples, creating virtual equivalents for cohabiting relationships, introducing no fault divorce proceedings, and so on; all these kind of changes have tended to say that marriage, in the conventional sense, is less important to us. You are not entitled to a privileged status by law and in society.
I'm not sure I get what you're saying.
I think there's a strong argument to say that civil partnerships have also contributed to weakening real marriage.
So you're saying that straight people won't want to get married because gay people can? And that's going to make abortion rates rise?
Well... it would redefine marriage. Which is something that has been the same for centuries, in terms of Western culture. And that would make people feel differently towards the institution.
Oh. Well, OK. Thank you.
Following our conversation, I did some super-scientific research using methods similar to what I imagine SPUC used when preparing their "detailed data and references" (Google and Wikipedia) and found that there are five countries where same-sex marriage has been legal for five years or more (FIVE countries? Fuck, come on Earth) and, of those five countries, the abortion rate has only risen in one since they introduced weddings for gays.
So the babies are safe! The gays aren't gonna kill them! Wooh! I called SPUC back to deliver this awesome news.
VICE: Hey! Great news, I looked into the abortion rates of countries where same-sex marriage has been legal for five years or more and, with the exception of one country, there hadn't been any rise in the abortion rates.
SPUC: Right.
In Spain it rose, but in Canada and South Africa it fell. And in the Netherlands and Belgium, there was no significant change.
Right… Well... I don't think anybody would expect any difference after five years. That's no time at all to make a judgement.
Well, it's been legal since 2001 in the Netherlands, so that's quite a long time.
Eleven years is not a huge amount of time to expect a big rise in the abortion rates.
But, it's been 11 years... How long is it going to take before straight people start saying, "You know what, I don't want to get married because it's been weakened too much by gays"? Like, 20?
It could be. When people do get married, the whole legal structure built around the child-rearing nature of marriage is removed. That may have consequences for the unborn, because the unborn, when it comes to the weakening of the definition of marriage, suffer most.
Eleven years is surely a long enough period of time?
No. I don't think so. And you're talking now about one country—
Four countries.
One country, that is famously down the path of sexual revolution. I would not expect a massive hike in the abortion rate after 11 years when marriage has already been degraded as much as it has there already.
What about Belgium or South Africa?
Put it this way, do you think it's going to do anything to reverse the abortion rate?
No. But there are lots of things that won't reverse the abortion rate that are unrelated. Like if McDonald's introduced a new type of burger, that's not going to reverse the abortion rate, but surely you don't think that should be banned?
But beef burgers have nothing to do with babies.
Two gay people getting married doesn't either.
No, but they are redefining. You change things in a radical way, and where it's most harmful is the womb.
Well, um, OK. Thank you for taking the time to talk to me. I'm sorry the good news didn't make you happier. I thought you'd be psyched.
Take care.
I guess ignorance isn't blissful.
Posted by Ulf Raynor at 4:40 PM