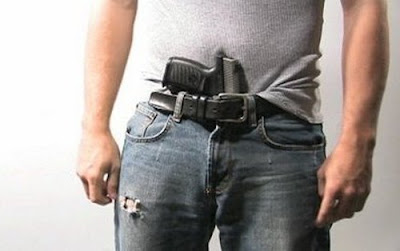 Colorado Springs police should defend the right of a gay man, or any law-abiding person, to bear a gun. Instead, they violated James Sorensen’s Second Amendment right to protect himself from hate crimes or other threats to himself or others.
Police approached Sorensen on July 21, as he left Pridefest in Acacia Park, because a 40-caliber handgun was holstered on his hip. They detained Sorenson for almost 15 minutes before hauling him to jail. Sorensen’s partner videotaped 13 minutes of the ordeal. (see video)
“This is because I’m gay, isn’t it? I’m gay and I’m carrying a weapon,” Sorensen said. ... “You wanted to tase me because I wasn’t going to give you my identification, and then you were going to arrest me for not giving you my ID, which I have no reason to give you my ID, but I did because I don’t want this to go on. I want to go home.”
The drama-on-tape culminates when an officer orders Sorensen’s hands in the air.
“Put your hands in the air,” the officer demands for a second time.
“Negative, sergeant,” says Sorensen.
“You’re about to get the (expletive) kicked out of you,” the sergeant says.
Sorensen heeds the warning and submits to arrest, as an officer takes his gun. They jail him for almost an hour and learn later that they were wrong. Sorensen broke no law.
“He was right and we were in the wrong, definitely,” said Barbara Miller, police spokeswoman.
Police attribute their outrageous conduct to an outdated “cheat sheet” that guides them on laws. A decade has passed since anything forbade guns in city parks.
Though police blame their actions on ignorance of the law, Sgt. Lance Lazoff lectured Sorensen after he complained that no signs forbade guns in the park: “Sir, ignorance of the law is not an affirmative defense.”
“I am very disturbed by this,” Mayor Steve Bach told The Gazette. “How in the world could they not have a current cheat sheet? It’s totally unacceptable. I will get to the bottom of it and there will be consequences.”
Sorensen’s arrest — like the police entrapment of a Hooters waitress last year — does not correspond with Bach’s desire for a city government that protects and serves law-abiding taxpayers.
“We need to move away from the old way,” Bach said. “We are going from a regulatory agency’s mindset to a model that is customer-service oriented.”
Bach is pleased that Miller publicly disclosed wrongdoing.
“That is refreshing,” Bach said. “It reflects the kind of open and transparent, public-service model that I want.”