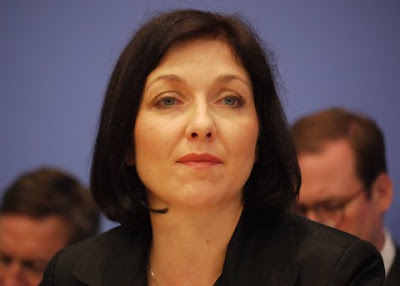 Katherina Reiche may have thought she was just reiterating her party's traditional pro-nuclear family stance. But remarks she made earlier this week on gay marriage have triggered an outpouring of protest. Indeed, the Internet fury has reached such dimensions that Reiche has taken her own Facebook page offline.

In remarks published in the Tuesday edition of the mass circulation newspaper Bild, Reiche called on her party, the center-right Christian Democratic Union, to stand by the institutions of marriage and family. "Our future lies in the hands of the family, not in same-sex civil unions," she said, reacting to a recent German debate about rights for gay and lesbian couples in civil unions. "Next to the euro crisis, demographic change is the biggest threat to our prosperity," she added, in a reference to the fact that Germany's low birth rate is expected to cause the population to shrink dramatically in the coming decades. The CDU, she said, "must say clearly that it stands for family, children and marriage."
Since Reiche's remarks were published on Tuesday, she has become the subject of tirades on Internet forums, where users have called her a "homophobe" and a "hate preacher against homosexuals." Although she took her own Facebook page offline on Tuesday after a flood of comments, a new Facebook page called "No Future with Katherina Reiche" received over 6,000 likes within one day of being set up. An open letter to Reiche on the page reads: "Your comments are a slap in the face of all families who do not correspond to your traditional norms."

Reiche's comments, though, aren't the only ones arousing the ire of Germany's netizens this week. An editorial in the mass-circulation tabloid Bild on Thursday written by long-time commentator Franz Josef Wagner has kicked up a storm of outrage of its own. In a page two editorial, he wrote: "The Justice Ministry would like to make (civil unions) the equal of 'Daddy-Mommy-Baby-Marriages'.... That makes me feel queasy." He continues: "Earlier, homosexuals were sentenced to prison time. What a glorious time for you. Nobody locks you up, you love your partners and you are allowed to love them." The suggestion is clear: Be happy with being allowed to live life outside of prison.
Posted by Ulf Raynor at 4:52 PM