Paul Ryan’s Speech, What A Work Of Lies And Deceptions 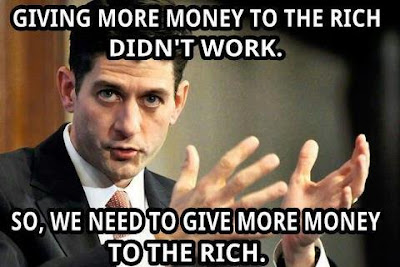 So, Ryan’s primary job tonight was to introduce himself and make himself seem likeable, and he did that well. The personal parts of the speech were very personally delivered, especially the touching parts where Ryan talked about his father and mother and their roles in his life. And at the end of the speech, when Ryan cheered the crowd to its feet, he showed an energy and enthusiasm that’s what voters want in leaders and what Republicans have been desperately lacking in this campaign.
To anyone watching Ryan’s speech who hasn’t been paying much attention to the ins and outs and accusations of the campaign, I suspect Ryan came across as a smart, passionate and all-around nice guy — the sort of guy you can imagine having a friendly chat with while watching your kids play soccer together. And for a lot of voters, what matters isn’t what candidates have done or what they promise to do —it’s personality. On this measure, Mitt Romney has been catastrophically struggling and with his speech, Ryan humanized himself and presumably by extension, the top of the ticket.
2. Deceiving
On the other hand, to anyone paying the slightest bit of attention to facts, Ryan’s speech was an apparent attempt to set the world record for the greatest number of blatant lies and misrepresentations slipped into a single political speech. On this measure, while it was  Romney who ran the Olympics, Ryan earned the gold.
The good news is that the Romney-Ryan campaign has likely created dozens of new jobs among the legions of additional fact checkers that media outlets are rushing to hire to sift through the mountain of cow dung that flowed from Ryan’s mouth. Said fact checkers have already condemned certain arguments that Ryan still irresponsibly repeated.
Fact: While Ryan tried to pin the downgrade of the United States’ credit rating on spending under President Obama, the credit rating was actually downgraded because Republicans threatened not to raise the debt ceiling

.
Fact: While Ryan blamed President Obama for the shut down of a GM plant in Janesville, Wisconsin, the plant was actually closed under President George W. Bush

is that that amount was savings in Medicare reimbursement rates (which, incidentally, save Medicare recipients out-of-pocket costs, too) and Ryan himself embraced these savings in his budget plan

.
Elections should be about competing based on your record in the past and your vision for the future, not competing to see who can get away with the most lies and distortions without voters noticing or bother to care. Both parties should hold themselves to that standard. Republicans should be ashamed that there was even one misrepresentation in Ryan’s speech but sadly, there were many.
3. Distracting
And then there’s what Ryan didn’t talk about.
Ryan didn’t mention his extremist stance on banning all abortions with no exception for rape or incest, a stance that is out of touch with 75% of American voters

.
Ryan didn’t mention how his budget would eviscerate programs that help the poor and raise taxes on 95% of Americans in order to cut taxes for millionaires and billionaires even further and increase — yes, increase —the deficit

.
These aspects of Ryan’s resume and ideology are sticky to say the least. He would have been wise to tackle them head on and try and explain them away in his first real introduction to voters. But instead of Ryan airing his own dirty laundry, Democrats will get the chance.
At the end of his speech, Ryan quoted his dad, who used to say to him, “"Son. You have a choice: You can be part of the problem, or you can be part of the solution."
Ryan may have helped solve some of the likeability problems facing Romney, but ultimately by trying to deceive voters about basic facts and trying to distract voters from his own record, Ryan’s speech caused a much larger problem for himself and his running mate.