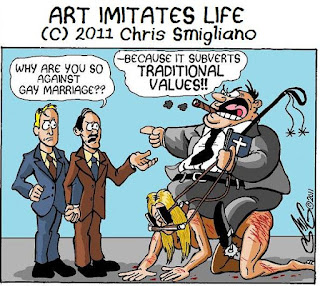 Christian apologist Alex McFarland on Thursday blamed the terrorist shooting in San Bernardino, California on abortion and gay marriage.
The husband and wife team's attack on a holiday party for environmental health department left 14 people dead and injured 21. The shooters died during a shootout with authorities the same day. Authorities are investigating the massacre as an act of terrorism with possible links to ISIS.


McFarland appeared on Dove TV's Focus Today to discuss the attack.
“People are saying, 'Why didn't God prevent this?'” McFarland started. “Look, we've for 45 years told God to leave us alone. Fifty-seven to sixty million babies aborted, now our Supreme Court has deviated from natural law to case law and we've redefined marriage … God forgive us for the murder of the unborn. God forgive us for kicking prayer out of public schools. God forgive us for making sodomy mainstream and redefining marriage.”
Elsewhere on the program, McFarland declared that President Barack Obama supposedly refused to fight the forces of radical Islam because he's secretly a Muslim.
“In my heart … I suspect he is a Muslim,” he said. “I really do.”

Another supposed Christian, proving that Christianity is just one short step away from being as radicalized and evil as their Islamic fundamentalist counterparts.
The same rhetoric, the same "God hates anyone not like us" , the fear mongering, the holier than thou supremacy and the joyful glee at the lamentations and suffering of anyone they deem inferior.
All the Abrahamic religions abound with an incessant need to oppress and subjugate; stifle anything or anyone that doesn't conform to their death worshiping cults and do so while saying "their" religion is the one true religion of God, love and peace.
Posted by Ulf Raynor at 3:38 PM