The Only Person Worse Than Trump...Evil Ted 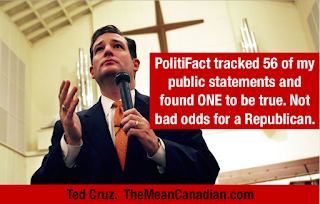 Republican presidential candidate Ted Cruz has won the endorsement of yet another opponent of LGBT rights.
Matt Barber, founder of the website BarbWire.com, has endorsed Cruz's bid for the White House.


“I am now proud to publicly endorse for president of the United States Sen. Ted Cruz, the man who best personifies the anti-establishment, principle over perceived pragmatism, survival over political correctness mood of the American electorate,” Barber wrote in an op-ed. “I believe, God willing, that Sen. Cruz, a constitutional stalwart and steadfast statesman, is here 'for a time such as this.' He alone, in the spirit of Reagan v. Carter, can, in my estimation, mop the floor in the general election with Hillary Clinton (aka, Obama in a pantsuit).”
Writing at Right Wing Watch, Kyle Mantyla reminded readers that Barber “has called for the passage of Russian-style anti-gay laws in America and has said that he has been 'called by God' to tell gays that AIDS is God's punishment for their sin and that it is his mission to wipe out the 'sexually immoral scourge of same-sex marriage.'”
Barber's endorsement comes after the National Organization for Marriage (NOM), the nation's largest group working to undermine the Supreme Court's June finding that gay and lesbian couples have a constitutional right to marry, Bob Vander Plaats, an influential conservative leader in Iowa, and James Dobson, founder of the Christian conservative Focus on the Family, endorsed Cruz for president.