Mask Of The Great Deceiver 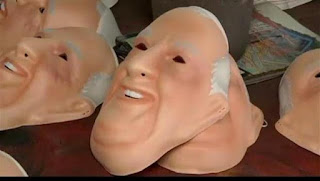 Pope Francis has urged Slovenians to uphold ‘family values,’ four days before the Catholic-majority country votes in a referendum on gay marriage.
Without explicitly bringing up the issue, the pontiff addressed Slovenian pilgrims during a general audience at St Peter Square on Wednesday (16 December).
‘I wish to encourage all Slovenians, especially those in public capacity, to preserve the family as the basic unit of society,’ he said.
In February, the Slovenian parliament passed an amendment to the Marriage and Family Relations Act extending all marriage rights, including adoption, to gay couples.
However, gay marriage opponents successfully gathered more than 40,000 signatures to force a referendum on the issue.
Slovenia will go to the polls on Sunday and if 20% of voters oppose the law, it will be scrapped.
‘The rights of a minority, particularly to equality, shouldn’t be subject to removal by the whim of the majority,’ said Boris Dittrich, LGBT rights advocacy director at Human Rights Watch.

Once again Pope Francis shows his true colors, those of a liar and deceiver.
The man wears a mask of acceptance and piety, but behind that mask is a loathsome deceiver who preys on the fears and bigotry of his cult to secure his base support with a call to demean and dehumanize a minority.
Whats even worse, is that it will only take a 20% vote (not even a majority one) to bereft gay couples from all they have fought and striven for in the way of equality.
This is why so many gay people hate Christians, we're sick of being mentally raped by your sick, twisted evil version of morality, that you, yourselves don't even live by.
Posted by Ulf Raynor at 3:20 PM