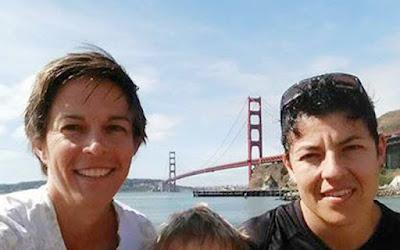 Air Force Major Adrianna Vorderbruggen was among the six US troops killed this week in a suicide bombing in Afghanistan.
She is survived by her wife Heather, who she married in 2012, and their young son.
Vorderbruggen was part of a convoy on a routine security detail Monday (21 December) north of Kabul when a man drove up on a motorcycle and denoted the suicide vest he was wearing.
She is believed to be the first openly gay Air Force officer to die in combat and is the third female member of the Air Force to die in Afghanistan.
In addition to the six deaths, two other US service members and a local interpreter were injured in the blast.
The Taliban claimed responsibility for the attack, according to NBC News.
Vorderbruggen and her wife were active in the organization Military Partners and Families Coalition which pointed out in a statement that Tuesday (22 December) marks five years since the repeal of Don’t Ask, Don’t Tell was signed.
DADT was a policy that prevented openly gay and lesbian servicemembers from serving openly in the military.
‘We honor the anniversary with somber hearts and the knowledge that families like Major Vorderbruggen’s no longer serve in the shadows,’ the group stated in a Facebook post. ‘We can take small comfort in the fact that they will be extended the same rights and protections due any American military family as they move through this incredibly difficult period in their lives.’
The group describes Vorderbruggen as ‘a person who lived for her family and for her country.

‘She was one of the most friendly and laid-back people you could ever hope to meet and was an accomplished airman, a great athlete, and most of all, a wonderful mom. She leaves an indelible legacy of strength and selflessness to all those touched by her life.’
Posted by Ulf Raynor at 5:53 PM