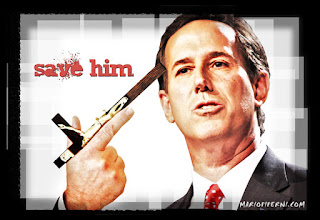 Republican presidential candidate Rick Santorum on Sunday said that if elected he would not recognize the marriages of gay and lesbian couples.
Santorum, a vocal opponent of marriage equality, made his remarks during an interview with the Catholic news network EWTN.


Matthew Franck of the Witherspoon Institute asked Santorum how his administration would treat the Supreme Court's June ruling which declared that gay couples have a constitutional right to marry.
Santorum responded that as president he could not reverse the high court's Obergefell decision because it affected state laws. He added that he “would confront the court” on its 2013 ruling which struck down a key provision of the Defense of Marriage Act (DOMA). He called DOMA a “good” and “valid” law that he would enforce.
DOMA prohibited federal agencies from recognizing the legal marriages of gay couples.
Writing at Right Wing Watch, Miranda Blue noted that Santorum had previously criticized President Barack Obama for refusing to defend the law in court, calling it unconstitutional. At the time, Santorum called Obama's move a “power grab” and declared that the decision rested not with the president but with the Supreme Court.

Republican bigots! So many are so happy and proud to admit their bigotry, be it against gays or people of different races or nationalities! Incredible!