You Can Now Get Married By The Flying Spaghetti Monster 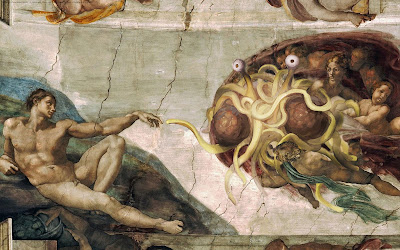 The satirical Church of the Flying Spaghetti Monster has won the right to perform legal marriages in New Zealand after the country’s Registrar-General of Marriages recognized the group as an organization with the purpose of upholding or promoting religious beliefs or philosophical or humanitarian convictions in line with the country’s Marriages Act.
The ‘Pastafarian’ faith had no official stance on same-sex marriage until January of 2011 when church member ‘Katie’ had a divine revelation from the Flying Spaghetti Monster while cooking a grilled cheese sandwich.
‘During his appearance he told me that homosexuals are gay because He has touched them with his noodley appendage,’ Katie revealed in a position statement on the church’s official website.
‘This is the reason that “experts” have had so much difficulty pinpointing what makes someone gay. And since gays and lesbians have been chosen by Him, to deny them the right to get married is an abomination in His eyes (meatballs).
‘Of course many have argued that no major religion has ever accepted homosexuality. It should obvious to any FSM follower that the real reason homosexuals are shunned from mainstream religion is because of blatant prejudice towards those who have been touched by Him. A bigotry that I know many of my fellow Pastafarians have experienced first hand.’
Same-sex marriage has been legal in New Zealand since 19 August 2013 so the Church of the Flying Spaghetti Monster is now free to marry any gay or straight couple that seeks their blessing or assistance.
As with other faith groups that have been allowed the right to perform marriages in New Zealand the Registrar-General made no judgement on the validity of their beliefs or convictions.
‘A review of media and the Church of the Flying Spaghetti Monster’s international website show a consistent presentation of their philosophies,’ the Registrar-General found.
‘While some claim this is a “parody organization,” members have rebutted this on a number of occasions.’
Pastafarians have previously won the right to wear colanders on their heads as religious headwear in their photo IDs in New Zealand.
Other groups that have been given the right to perform marriages in New Zealand include yoga groups, Wiccans, Scientologists, Heathens, Druids, Humanists and Reiki practitioners.
Posted by Ulf Raynor at 5:54 PM

it's great that they've got a licence

Europeans may avail themselves of a small informal ceremony at the Chapel of the Cherry Chopsticks, St Peter's, Vatican Street, Rome (no confetti)