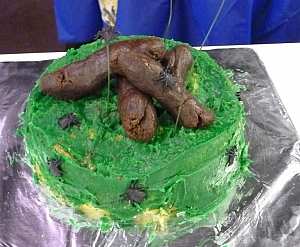 
For nearly six months the couple refused to pay the damages.
Aaron Klein paid $136,927.07 on Monday, which includes accrued interest. He also paid $7,000 earlier this month.
Aaron Klein declined to make the cake for the women on January 17, 2013. Klein said he does not hate gays but that making a cake for a same-sex wedding would violate his faith. (At the time, Oregon had the nation's most robust domestic partnership law. Following a federal judge's ruling in May, 2014, Oregon became the 18th state to allow gay and lesbian couples to marry.)
In refusing to pay the debt, the Kleins had claimed financial hardship. But critics pint out that supporters of the couple have raised at least $515,000 in 3 crowdfunding accounts to help them with expenses.
State officials said that they were looking to establish property or asset liens to collect the money.

Damn, even after the fine, bigotry pays off big time.
Posted by Ulf Raynor at 3:55 PM