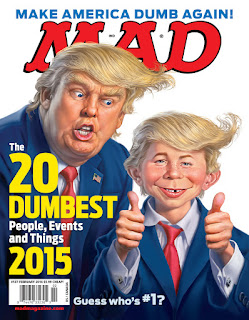 Kentucky county clerk Kim Davis and Republican presidential candidate Donald Trump are among those included in Mad magazine's list of “20 Dumbest People, Events and Things.”
MAD editors skewer Davis for defying the Supreme Court's June finding that gay and lesbian couples have a constitutional right to marry. Davis fought to keep her office from issuing such licenses, claiming that it would violate her conscience.


Under the heading What in God's Name is She Doing? editors wrote about Davis: “When Kentucky County Clerk Kim Davis refused, 'under God's authority,' to issue marriage licenses to gay couples, it made a lot of no-sense. That's because Kim is the kind of Christian who cares more about what Mike Huckabee said about gay marriage – 'It's like asking someone who's Jewish to start serving bacon-wrapped shrimp in their deli' – than what Jesus said, which was nothing. Still, by putting her homophobic theology above the law of the land that she swore to God to uphold, Kim became a heroine – you might even say doll – of intolerant ideologues everywhere.”
The Kim “all-American girl” doll includes court orders, “a darling miniature Bible, severely abridged to only contain those verses which Kim finds convenient to obey” and a series of “fun, easy-to-read chapter books,” including Kim Cherry-Picks Passages from the Bible, Kim and her New Gay Friends and Kim and the Presidential Candidate who Never Was. That last title's cover includes an image of Davis with Mike Huckabee.
Trump covers this year's edition of the MAD 20, which goes on sale December 15.
Posted by Ulf Raynor at 6:12 PM